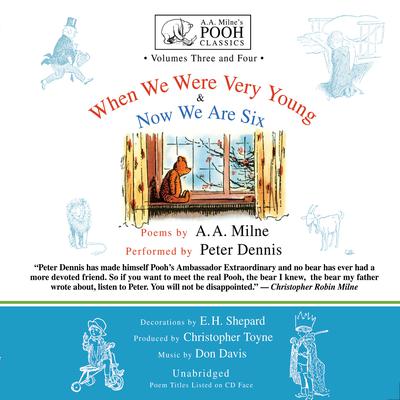 When We Were Very Young and Now We Are Six

By A. A. Milne
Produced by Christopher Toyne
Music by Don Davis
Read by Peter Dennis

A. A. Milne Bother! LA Production

Blackstone Audio presents, from the unabridged collection "A.A. Milne's Pooh Classics," the forty-four poems from When We Were Very Young and the thirty-five poems of Now We Are Six, performed by Peter Dennis. This is the only reading of these delightful verses authorized by A.A. Milne's son, Christopher Robin.

The first of A.A. Milne's four world-famous books for children, When We Were Very Young introduced Christopher Robin to innumerable friends and has probably been read more widely than any other book of verse for children published in our time. Now We Are Six followed, becoming a modern classic in its own right.

For sheer delightfulness, the children's rhymes of A.A. Milne are in a class by themselves with their charm, humor, understanding, and irresistible rhythms.

“Peter Dennis has made himself Pooh’s Ambassador Extraordinary and no bear has ever had a more devoted friend. So if you want to meet the real Pooh, the bear I knew, the bear my father wrote about, listen to Peter. You will not be disappointed.” —Christopher Robin Milne
“Peter Dennis brings to these remarkable readings a quality that goes beyond professionalism into an area we can’t even begin to define.” —Los Angeles Times
“Congratulations on your outstanding contribution to children and their families.” —Diana Huss Green, editor-in-chief, Parents’ Choice Foundation
“Read these poems aloud and pass along (or start) a family tradition.” —Amazon.com, editorial review