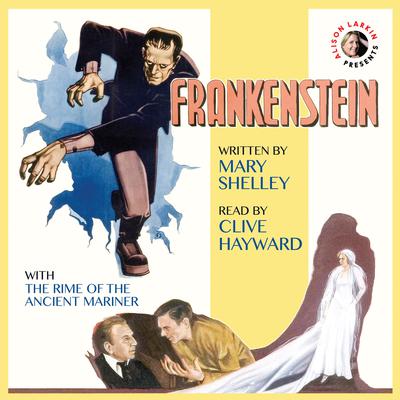 Frankenstein by Mary Shelley with The Rime of the Ancient Mariner by Samuel Taylor Coleridge and commentary by Alison Larkin: 200th Anniversary Audio Edition

Frankenstein by Mary Shelley with The Rime of the Ancient Mariner by Samuel Taylor Coleridge and commentary by Alison Larkin: the 200th anniversary audio edition

This chilling tale of a gruesome monster unleashed into the world by an unthinking scientist was first conceived in 1818 by nineteen-year-old Mary Shelley on a dark, rainy night on Lake Geneva. Lord Byron and Percy Shelley challenged their friends to see who could come up with the most horrifying story imaginable. Mary Shelley did, terrifying them all with her nightmare-inspired tale.

Brilliantly narrated by British actor Clive Hayward, this 200th anniversary audio edition of Frankenstein is followed by The Rime of the Ancient Mariner by Samuel Taylor Coleridge which had a haunting influence on young Mary Shelley many years before the story of Frankenstein entered her dreams. Commentary on Shelley’s feminist roots is by Alison Larkin.

Samuel Taylor Coleridge (1772–1834) studied classics at Jesus College, Cambridge. As a radical young poet he collaborated with Wordsworth in Lyrical Ballads. He was by turns poet, dramatist, political journalist, essayist, and public lecturer. Chronic ill health and addiction to opium led to his death in 1834.