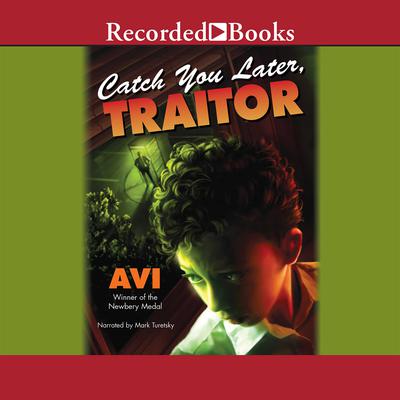 By Avi
Read by Mark Turetsky

From Newbery Medalist Avi comes the thrilling and suspenseful story of an ordinary American family who fall under suspicion. It's 1951, and twelve-year-old Pete Collison is a regular kid in Brooklyn, New York, who loves Sam Spade detective books and radio crime dramas. But when an FBI agent shows up at Pete's doorstep, accusing Pete's father of being a Communist, Pete is caught in a real-life mystery. Could there really be Commies in Pete's family? As Pete follows the quickly accumulating clues, he begins to wonder if the truth could put his family's livelihood--and even their freedom--at risk. In the tradition of "Who Was That Masked Man, Anyway?, Don't You Know There's a War On?, "and "Nothing But the Truth, Catch You Later, Traitor" tells a funny, insightful story packed with realistic period detail of a boy in mid-twentieth-century America whose family is caught in the wide net of America's Red Scare.

“Authentic period details…add a colorful backdrop to Pete’s quest as he navigates the murky gray area between truth and fiction. An excellent introduction to the frenzy of the McCarthy era.” —Publishers Weekly (starred review)
“Avi, a master of historical fiction, vividly recreates not only the neighborhoods and pop culture of period Brooklyn, but the runaway paranoia that dominated daily life in the early years of the Cold War. With each clue Pete uncovers, the tension picks up, engaging readers in solving the dual mystery of his father’s past and identifying his accuser whose name is kept a well-concealed surprise until the last moment…As a mystery, historical fiction, and love letter to 1950s Brooklyn, this novel succeeds on every level.” —School Library Journal (starred review)
“An involving, twisty mystery, grounded by the palpable emotional threat of Pete’s father being taken away. An accomplished historical mystery by one of kid lit’s most reliable craftspeople.” —Booklist
“Mark Turetsky provides just the right noir-style narration for a mystery that takes place in the 1950s…Throughout the story Pete switches to his ‘detective’ point of view—trying to see the world with a new set of eyes—and Turetsky follows suit. As his voice deepens and his pacing slows, listeners are swept up in description and action with the sound of an old-time radio show. Throughout this middle-grade mystery Turetsky keeps listeners in suspense.” —AudioFile
“[Avi] has indeed brought to life the political turmoil and intolerance of the times of the mid-1950s in Brooklyn…Sports fans will enjoy the mention of the Dodgers and Giants rivalry during that time period. This is a well-crafted novel that indeed brings memory to life with authentic period details.” —Children’s Literature
“Younger readers will enjoy this tense, exciting story that personalizes the Red Scare. Events are softened…Still, Pete and readers will fully understand that retaining personal integrity and beliefs, including freedom for all, is one’s most valuable possession.” —VOYA
“A thought-provoking story about suspicion, trust, and a memorable pennant race from a one-time Brooklyn boy.” —Kirkus Reviews

Avi is the author of more than fifty books for children and young adults, including the 2003 Newbery Medal winner Crispin: The Cross of Lead. Along with his two Newbery Honors, he has won many other awards for his fiction. He lives with his family in Denver.