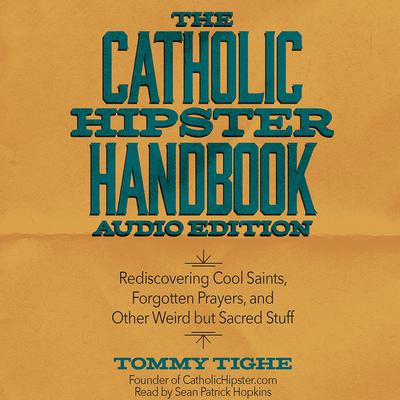 Being a Catholic Hipster is all about an attitude—an attitude grounded in being part of a countercultural community of believers dedicated to something bigger than themselves in a world dominated by self-centeredness. It’s about yearning to learn more about the faith by seeking out “Catholic cool”—overlooked saints, forgotten prayers and feast days, and traditional practices long set aside by mainstream believers. The Catholic Hipster podcaster Tommy Tighe will help readers rediscover everything awesome about the Catholic faith. The Catholic Hipster started out in 2014 with a little bit of fun—the Catholic Hipster of the Year contest—on Tighe’s blog. But Twitter is where—in all its 140-character glory—that Tighe’s “The Catholic Hipster” movement really took root. That’s where a group of cool and funky countercultural Catholics gather to swap one-liners, hilarious hipster memes, and all things authentically Catholic. Tighe even met comedienne Jeannie Gaffigan, who wrote the foreword for The Catholic Hipster Handbook, on Twitter. She said what drew her to the feed was that Tighe was “an embarrassingly Catholic dude who knew he was embarrassingly Catholic and was not embarrassed by it” and that he was “not preachy or judgey or divisive.” Catholic hipsters in a nutshell. Tighe and a group of hipster friends—including Sarah Vabulas, Anna Mitchell, Fr. Kyle Schnippel, and Lisa M. Hendey—explore the beautiful weirdness of the Catholic Church and invite others along for the journey. They share their love for extraordinary saints, offer up obscure prayers, provide short reflections on something quirky and Catholic they’ve rediscovered, and dare readers to put their faith into action with some cool and challenging practices they can do on their own. Discover what’s awesome about: ·Wearing a scapular ·Applying Laudato Si’ at your local farmer’s market ·Hanging with priests, monks, and nuns ·Learning to see Christ in making beer ·Praying the Rosary everywhere you go ·Loving the Latin Mass ·Making the Liturgy of the Hours a daily part of your routine The Catholic Hipster Handbook will help readers realize the only way to go against what’s normal and accepted in the culture is to be authentically Catholic.

Tommy Tighe is a licensed marriage and family therapist who has worked in community mental health since 2006. He earned a bachelor’s degree in psychology in 2003 from the University of California at Santa Barbara and a master’s degree in clinical psychology from Antioch University in 2005.

Tighe has contributed to Catholic Digest, Aleteia, and CatholicMom.com. He records The Catholic Hipster Podcast with cohost Sarah Vablulas. He has appeared on Relevant Radio, EWTN Radio, and The Catholic Channel on SiriusXM Radio, which runs his podcast The Chimney.

He lives with his wife, Karen, in Livermore, California. They have four sons.