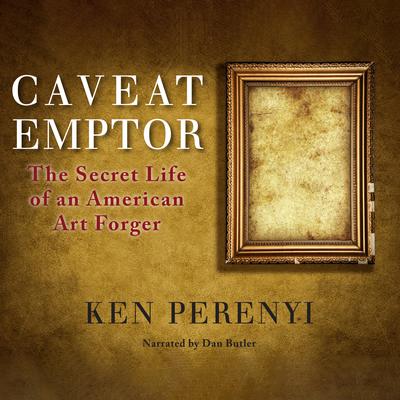 Caveat Emptor: The Secret Life of an American Art Forger

The true story of America's greatest art forger! Ten years ago, an FBI investigation was about to expose a scandal in the art world that would have been front-page news in New York and London. After a trail of fake paintings of astonishing quality led federal agents to art dealers, renowned experts, and the major auction houses, the investigation inexplicably ended, despite an abundance of evidence collected. The case was closed and the FBI file was marked "exempt from public disclosure." Now that the statute of limitations on these crimes has expired and the case appears hermetically sealed shut by the FBI, this audiobook, Caveat Emptor, is that artist Ken Perenyi's confession. It is the story, in detail, of how he pulled it all off. Unlike other forgers, Perenyi produced no paper trail, no fake provenance whatsoever; he let the paintings speak for themselves. And that they did, routinely mesmerizing the experts in mere seconds.

“By his own admission, Ken Perenyi is a liar, a cheat, and a thief—but to give him his due, he is also pretty brilliant…His astonishing memoir, Caveat Emptor, is by turns horrifying and hilarious…One hesitates to praise an unrepentant wrongdoer’s autobiography—innocent teenagers contemplating career options should not be allowed near this book—but anybody with the slightest interest in painting or deception will find Caveat Emptor an engrossing read.” —Wall Street Journal
“Even if you know nothing about fine art, Dan Butler’s superb performance will bring this complex and sometimes shady world to life. His sensitive delivery of Ken Perenyi’s poignant memoir of life as a liar and thief makes it hard not to like this consummate scam artist in spite of it all…Butler’s easy reading style carries the narrative flawlessly, with occasional forays into excitement and danger where the going get tight for Perenyi. At those points he ratchets up the emotional wattage just enough to keep you on the edge. This is a thoroughly competent delivery using only Butler’s native voice—but what a voice.” —AudioFile
“The most fascinating parts of his account are his meticulous descriptions of the forging process…A captivating story rich in illuminating details.” —Booklist
“Perenyi channels Holden Caulfield with his forthright, unadorned prose style and straightforward accounts of his past exploits…The details of Perenyi’s forgeries are fascinating, as is the development of his artistic though duplicitous techniques.” —Library Journal
“Readers will be captivated as they follow the development of this remarkable talent over a forty-year career.” —Kirkus Reviews

Ken Perenyi was one of the world’s greatest art forgers for more than thirty years, only barely eluding a heavy prison sentence at the end of his covert career. He currently runs an art gallery in St. Petersburg, Florida, where he still produces some of the most remarkable forgeries in the world.