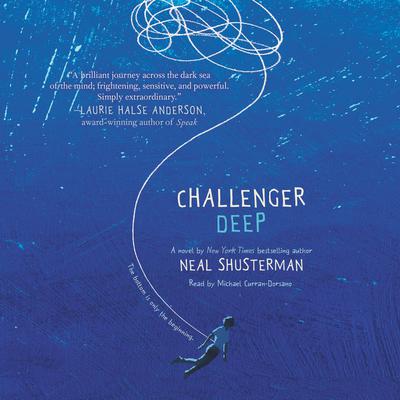 A BookPage Best Book of 2015 for Teens

Caden Bosch is on a ship that's headed for the deepest point on Earth: Challenger Deep, the southern part of the Marianas Trench. Caden Bosch is a brilliant high school student whose friends are starting to notice his odd behavior.

Caden Bosch is designated the ship's artist in residence to document the journey with images. Caden Bosch pretends to join the school track team but spends his days walking for miles, absorbed by the thoughts in his head.

Challenger Deep is a deeply powerful and personal novel from one of today's most admired writers for teens. Laurie Halse Anderson, award-winning author of Speak, calls Challenger Deep "a brilliant journey across the dark sea of the mind; frightening, sensitive, and powerful. Simply extraordinary."

“A brilliant journey across the dark sea of mental illness; frightening, sensitive, and powerful. Simply extraordinary.” —Laurie Halse Anderson, New York Times bestselling author
“With lyricism and potent insight, Shusterman traces the schizophrenic descent and return of Caden Boscht…Shusterman has mined personal experience of mental illness with his son Brendan…It’s a powerful collaboration, and crucial to the novel’s credibility.” —Publishers Weekly (starred review)
“Caden Bosch…is a credible and sympathetic character, and his retreat into his own flawed mind is fascinating, full of riddles and surrealism…Will captivate readers, engender empathy for those with mental illnesses, and offer much fodder for discussion.” —Library Journal (starred review)
“A breathtaking exploration of one teen’s experience with schizophrenia…Haunting, unforgettable, and life affirming all at once.” —Booklist (starred review)
“An adventure in perspective as well as plot, this unusual foray into schizophrenia should leave readers with a deeper understanding of the condition.” —Kirkus Reviews (starred review)
“When handled well by a voice actor, an unreliable narrator is a delight—the narrator makes the listener believe in the character and then slowly reveals that all is not as it seems. Such is the work of Michael Curran-Dorsano as he narrates from the point of view of Caden Bosc…Curran-Dorsano’s soft voice works well as the internal voice for the teenaged Bosch. He keeps to a steady rhythm while also being capable of shifting his voice for other characters.” —AudioFile