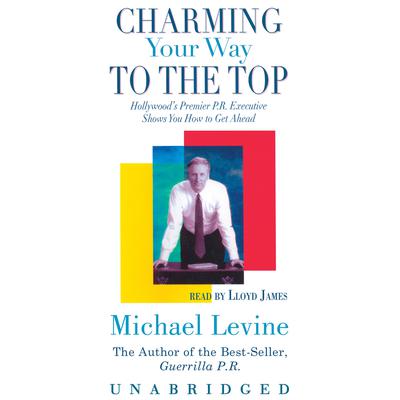 Charming Your Way to the Top: Hollywood’s Premier P.R. Executive Shows You How to Get Ahead

Charm is good business. It can increase your income, boost your status, and establish and maintain your reputation. In many cases, it can mean the difference between success and bankruptcy. However, most businesspeople don't fully understand the concept of charm. It ought to be a reflex, a conditioned response, to "turn on the charm" when dealing with customers, clients, associates, and employees—but it isn't, despite the fact that the value of charm has been made clear through opinion polls, scientific studies, and just plain old real life. It's true in politics. And it's certainly true in entertainment, a whole business based on the money-making potential of charm.

This is true for the small businessperson as well. Charm draws customers, whether to a garage, a dry cleaner's, or an investment bank.Charm gets noticed. When a customer contacts a firm for the first time, charm can seal the deal.But charm is only partly innate. Much of it is learned, from your parents, from your friends, and from people like author Michael Levine, who has made a lifelong point of paying attention to charm. And you can learn how to make it work for you. How do you succeed in business without really trying? By charming your way to the top.

“Some people can be wise, and some can be clever. Michael Levine is blessed with the ability to be both.” —Rabbi Harold Kushner, New York Times bestselling author of When Bad Things Happen to Good People
“In the Missouri Ozarks, when anybody is able to reduce profound complexity to pithy, pertinent shirt-sleeved English—as Michael Levine does—it’s said, ‘He has a gift for shucking right down to the cob.’ I’m glad Michael Levine labors on the side of propriety; he’d be a formidable adversary.” —Paul Harvey, syndicated radio commentator and New York Times bestselling author
“It has been said that the unexamined life is not worth living. Michael Levine examines his with great wit and wisdom.” —Dr. Jonas Salk, creator of the polio vaccine
“[Levine] passes on wisdome beyond his years.” —Kathie Lee Gifford
“Those of us in politics need all the wisdom we can get, and Michael Levine has plenty of it.” —Senator Bob Dole, former Senate majority leader
“Charm, Levine reminds us, is good business and can significantly increase your income, improve your status, and establish and maintain your reputation. It can mean the difference, in some cases, between success and bankruptcy.” —Booklist
“One of Hollywood’s brightest and most respected executives.” —USA Today
“The glitz makes the mechanics of nice go down more easily.” —Publishers Weekly

Michael Levine, founder of one of the country’s most prominent entertainment public relations firms, has been called “one of Hollywood’s brightest and most respected executives” by USA Today. He is the author of numerous books, including Guerrilla PR, the world’s most widely used introduction to public relations. His essays have been featured in the New York Times, Reader’s Digest, Hollywood Reporter, and USA Today. He hosts Inside Out with Michael Levine on KRLA, and he is the founder and owner of Levine Communications, based in Los Angeles.