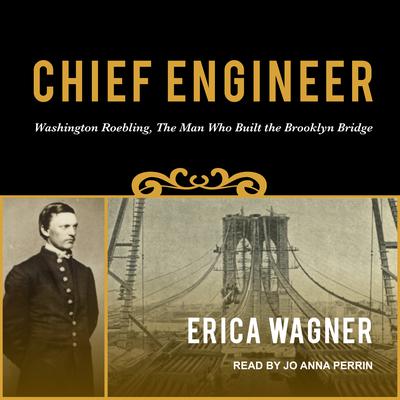 "I know that nothing can be done perfectly at the first trial; I also know that each day brings its little quota of experiences, which with honest intentions, will lead to perfection after a while." —Washington Roebling

His father conceived of the Brooklyn Bridge, but after John Roebling's sudden death, Washington Roebling built what has become one of American's most iconic structures—as much a part of New York as the Statue of Liberty or the Empire State Building. Yet, as recognizable as the bridge is, its builder is too often forgotten—and his life is of interest far beyond his chosen field. It is the story of immigrants, of the frontier, of the greatest crisis in American history, and of the making of the modern world.

Forty years after the publication of The Great Bridge, David McCullough's classic chronicle of how the East River was spanned, Erica Wagner has written a fascinating biography of one of America's most distinguished engineers, a man whose long life was a model of courage in the face of extraordinary adversity. Chief Engineer is enriched by Roebling's own eloquent voice, unveiled in his recently discovered memoir that was previously thought lost to history.

Erica Wagner was the literary editor of the London Times for seventeen years and is now a contributing writer for the New Statesman and consulting literary editor for Harper’s Bazaar. Her work has appeared in the Guardian, the Economist, the Financial Times, and the New York Times, among other publications. She is the author of Ariel’s Gift, Seizure, and the short story collection Gravity; she is the editor of First Light: A Celebration of Alan Garner. She was the recipient of the Eccles British Library Writer’s Award in 2014, and she is a lecturer in creative writing at Goldsmiths, University of London. She lives in London with her husband and son.