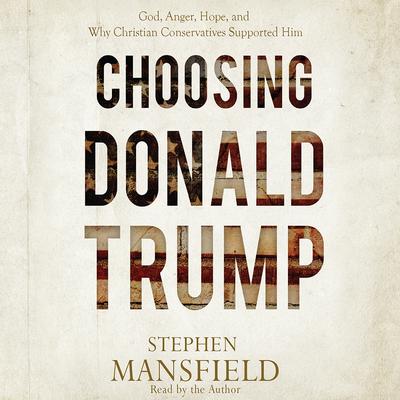 The 2016 election of Donald J. Trump exposed a deep divide in American politics and culture, one that pollsters and pundits didn't seem to realize was there. But Trump did, and he used it to his advantage in ways that surprised nearly everyone, even those who voted for him. Perhaps the biggest question on many people's minds is how, exactly, did a crass, unrepentant reality TV star and cutthroat business tycoon secure the majority of the religious conservative vote? Now the New York Times bestselling author of The Faith of George W. Bush and The Faith of Barack Obama turns his pen toward the Trump phenomenon. Through meticulous research and personal interviews, Stephen Mansfield uncovers who Trump's spiritual influences have been and explains why Christian conservatives were attracted to this unlikely candidate. The book ends with a reflection on the vital role of prophetic distance, both historically and now.

Stephen Mansfield is a writer and speaker best known for his groundbreaking books on the role of religion in history, leadership, and modern culture. He first came to international attention with The Faith of George W. Bush, the New York Times bestseller that influenced Oliver Stone’s film, W. His book The Faith of Barack Obama was another international bestseller. He has written celebrated biographies of Booker T. Washington, George Whitefield, Winston Churchill, and Abraham Lincoln, among others. Stephen speaks around the world on topics of faith, leadership, and culture. He is also the founder of two firms: the Mansfield Group and Chartwell Literary Group. He lives in Nashville and in Washington, DC, with his wife, Beverly, who is an award-winning songwriter and producer.