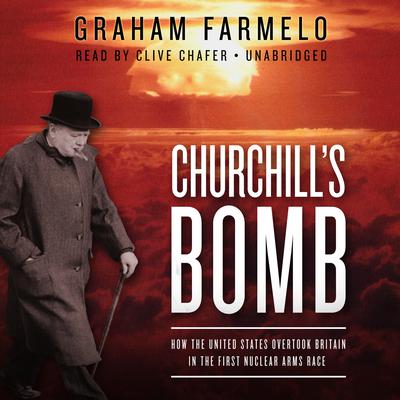 Perhaps no scientific development has shaped the course of modern history as much as the harnessing of nuclear energy. Yet the twentieth century might have turned out differently had greater influence over this technology been exercised by Great Britain, whose scientists were at the forefront of research into nuclear weapons at the beginning of World War II.

As award-winning biographer and science writer Graham Farmelo describes in Churchill's Bomb, the British set out to investigate the possibility of building nuclear weapons before their American colleagues. But when scientists in Britain first discovered a way to build an atomic bomb, Prime Minister Winston Churchill did not make the most of his country's lead and was slow to realize the bomb's strategic implications. This was odd—he prided himself on recognizing the military potential of new science and, in the 1920s and 1930s, had repeatedly pointed out that nuclear weapons would likely be developed soon. In developing the bomb, however, he marginalized some of his country's most brilliant scientists, choosing to rely mainly on the counsel of his friend Frederick Lindemann, an Oxford physicist with often wayward judgment. Churchill also failed to capitalize on Franklin Roosevelt's generous offer to work jointly on the bomb and ultimately ceded Britain's initiative to the Americans, whose successful development and deployment of the bomb placed the United States in a position of supreme power at the dawn of the nuclear age. After the war, President Truman and his administration refused to acknowledge a secret cooperation agreement forged by Churchill and Roosevelt and froze Britain out of nuclear development, leaving Britain to make its own way. Dismayed, Churchill worked to restore the relationship. Churchill came to be terrified by the possibility of thermonuclear war and emerged as a pioneer of d├®tente in the early stages of the Cold War.

“This book, like [The Strangest Man], shows a keen sense of the human comedy. Who were these people, and why did they behave the way they did?” —Wall Street Journal
“A well-written and deeply researched account of Britain’s engagement in atomic research…Farmelo’s study provides an excellent assessment of Churchill’s role in the British effort and complements Richard Rhodes’s classic The Making of the Atomic Bomb. A fine addition to the existing literature on the subject.” —Library Journal
“Farmelo constructs a nicely detailed and balanced record of the British ambivalence toward building an atom bomb in favor of the American effort…A tremendously useful soup-to-nuts study of how Britain and the US embraced a frightening atomic age.” —Kirkus Reviews
“Graham Farmelo offers a fresh and thoroughly researched history of the development of atomic weapons in his insightful and engaging account of Winston Churchill’s failure to forge a partnership of equal exchange between Great Britain and the United States in the development of the bomb.” —Mary Jo Nye, professor of history emerita, Oregon State University
“An excellent book. Graham Farmelo draws on many sources to show how Churchill, his scientific adviser Frederick Lindemann, and a host of other scientists and politicians developed the atomic bomb…But Farmelo’s book does more than unfold the hopes, doubts, and fears engendered by the bomb: it illuminates the relationship between big science and modern democracy.” —James W. Muller, professor of political science, University of Alaska, Anchorage
“What a brilliant and compelling book! Graham Farmelo sensitively and eloquently deconstructs the twists and turns of Winston Churchill’s involvement with nuclear weapons over nearly half a century, setting this unfamiliar tale in the context of the turbulent times. At its heart are the ambiguities of the World War II relationship between a scientifically innovative but economically weakened Britain and the inexhaustibly energetic USA with unlimited resources.” —Sir Michael Berry, professor of physics (Emeritus), University of Bristol
“A riveting, powerful, and timely reminder that high politics is anything but rational. Graham Farmelo vividly reveals how Winston Churchill learned about atomic physics in the 1920s, warned about the imminence of nuclear weapons in the 30s, and yet, paradoxically, squandered Britain’s lead in the field during the Second World War.” —Roger Highfield, Science Museum executive and Daily Telegraph columnist
“[A] dazzling book…Farmelo, prize-winning biographer of the physicist Paul Dirac, recounts this important story with skill and erudition…It’s the paradoxes and the nuances that make this episode in history, now illuminated as never before, so compelling.” —Guardian (London)
“Compelling…The value of Farmelo’s book is in its meticulous attention to the contingencies, accidents, uncertainties, inconsistencies, and idiosyncratic personalities in the story of how Britain didn’t get the Bomb during the war and how it did get it afterwards. It could all have turned out differently—but it didn’t.” —London Review of Books
“The author, a physicist, ranges across Winston Churchill’s long career…Farmelo is especially good on the Second World War years, revealing much about the Anglo-American relationship that has been guarded or unclear…Colorful.” —Nature
“A story as gripping as it is elegantly argued and precise.” —Financial Times
“[Churchill’s Bomb] scores some powerful points…The book describes a confounding sort of country: a small island capable of beating the world, steeped in self-defeating snobbery and parochialism.” —Economist

Graham Farmelo is a former senior executive at the Science Museum in London. He is currently a by-fellow at Churchill College, University of Cambridge, and an adjunct professor of physics at Northeastern University in Boston. Winner of the 2009 Costa Book Award for Biography and the 2009 Los Angeles Times Book Prize for Science & Technology for The Strangest Man, he lives in London, England.