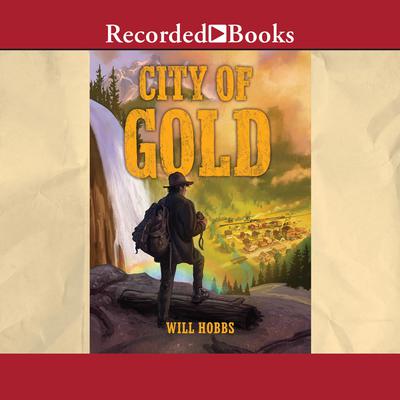 By Will Hobbs
Read by Donald Corren

Finalist for the 2021 Spur Award for Juvenile Fiction

Weeks after arriving in Colorado, fifteen-year-old Owen Hollowell wakes to see a rider in the moonlight stealing the family mules. Hearing they will likely be sold to the mines, Owen sets out to track the rustler over the mountains. Little brother Till insists he’s going along, but Ma says no. He’s only nine.

The outlaw’s trail leads to Telluride, the tempestuous City of Gold. With the help of the girl from the bakery, Owen is onto the culprit but gets nowhere with the towns notorious marshal. Hours after Till shows up on the train, the brothers head for the lawman’s office. Owen spots the mule thief in a photo of Butch Cassidy’s Wild Bunch. More than interested, the marshal leads the boys on horseback into the canyon country and all the way to Robbers’ Roost.

For readers who love adventure and humor, Will Hobbs has spun a tale of two brothers up against a mining company and a famous robber. Only their wits and courage can bring them home.

“Will knows Colorado, knows the land, knows the people, knows the history, and knows the mules. He also knows about mining for gold, gun-toting sheriffs, and Butch Cassidy’s Wild Bunch. You can find it all in City of Gold, a non-stop adventure…an exciting tale of yesterday, for today.” —Avi, Newbery Award-winning author
“Hobbs weaves a tale that will transport readers back in time and never let them get bored. A Western romp with anchors in history and geography.”  —Kirkus Reviews
“Fast-paced, suspenseful chapters will have readers flipping pages. Fans of historical fiction and adventure will find much to love here.” —Booklist

Will Hobbs is the author of many outdoor adventure novels for upper elementary, middle school, and young adult readers, as well as a few picture book stories. Several of his novels have been named Best Books for Young Adults by the American Library Association, and Ghost Canoe, his first mystery, won the Edgar Allan Poe Award for Best Young Adult Mystery. The ALA’s list of the 100 Best Young Adult Books of the Twentieth Century includes two of Will’s titles: Far North and Downriver. A graduate of Stanford University and a former reading and language arts teacher, he lives with his wife in Durango, Colorado.