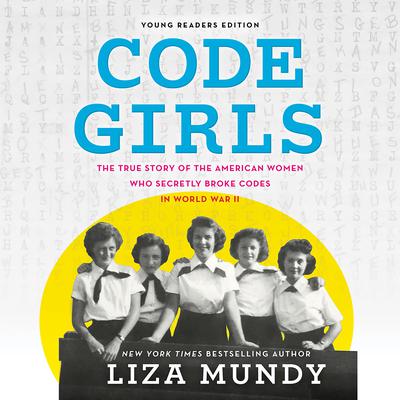 In the tradition of Hidden Figures and The Girls of Atomic City, Code Girls is the amazing true story of the young American women who cracked German and Japanese military codes during World War II.

More than ten thousand women served as code breakers during World War II, recruited by the US Army and Navy. While their brothers and boyfriends took up arms, these women moved to the nation’s capital to learn the top secret art of code breaking.

Through their work, the “code girls” helped save countless lives and were vital in ending the war. But due to the top secret nature of their accomplishments, these women have never been able to talk about their story—until now.

Through dazzling research and countless interviews with the surviving code girls, Liza Mundy brings their story to life with zeal, grace, and passion. Abridged and adapted for a middle grade audience, Code Girls brings this important story to young readers for the first time, showcasing this vital story of American courage, service, and scientific accomplishment.

“[A] story of courage and determination that makes you want to work harder and be better.” —Denver Post

Liza Mundy is a staff writer at the Washington Post and the bestselling author of Michelle: A Biography and Everything Conceivable, among other works. She received her AB degree from Princeton University and earned an MA in English literature at the University of Virginia. She has won awards for essays, profiles, and science writing from the Sunday Magazine Editors Association, the Maryland-Delaware-DC Press Association, the American Association of Sunday and Feature Editors, The Missouri Lifestyle Journalism Awards, and the Gay and Lesbian Alliance Against Defamation. She was a 2003 Kaiser Foundation Media Fellow and a 2005 Media Fellow at the Marine Biological Laboratory in Woods Hole, Massachusetts.