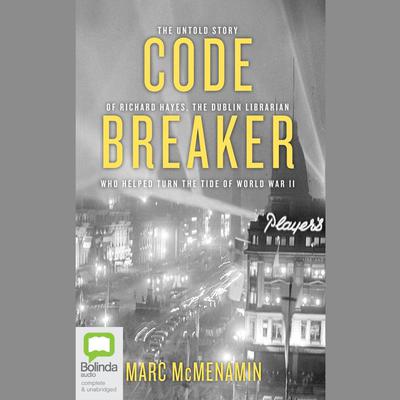 Codebreaker: The Untold Story of Richard Hayes, the Dublin Librarian Who Helped Turn the Tide of World War II

When Richard Hayes, a gifted polymath and cryptographer, was drafted by Irish intelligence services to track the movements of a prolific Nazi spy, Hermann Görtz, it set in motion one of the most remarkable episodes in Irish history.

What followed was a high-stakes game of cat and mouse that would wind its way through the capital and its suburbs, reverberate through the corridors of power, test the sympathies of those in high society, and even expand to jeopardise the Allied war effort.

Codebreaker is a riveting and deeply researched account of an extraordinary period of history – when Dublin became a hotbed of Nazi intrigue and the fate of an independent Ireland settled on the shoulders of an unassuming employee of the National Library.

Marc McMenamin is an author, journalist, and documentary maker. A specialist in exploring uncharted corners of Irish history, he is the maker of several acclaimed radio documentaries, including Good Cop/Bad Cop, exploring the life of Peter Daly, the controversial former New York Police Department; and Richard Hayes, Nazi Codebreaker.