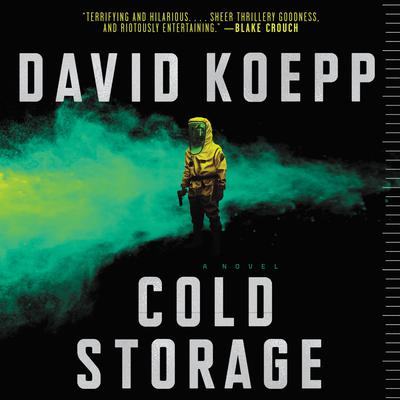 An Ars Technica Pick of Most Anticipated Books of 2019

A Kirkus Reviews Pick of the Scariest Books Written This Year

For readers of Andy Weir and Noah Hawley comes an astonishing debut by the screenwriter of Jurassic Park: a wild and terrifying adventure about three strangers who must work together to contain a highly contagious, deadly organism

When Pentagon bioterror operative Roberto Diaz was sent to investigate a suspected biochemical attack, he found something far worse: a highly mutative organism capable of extinction-level destruction. He contained it and buried it in cold storage deep beneath a little-used military repository.

Now, after decades of festering in a forgotten sub-basement, the specimen has found its way out and is on a lethal feeding frenzy.  Only Diaz knows how to stop it.

He races across the country to help two unwitting security guards—one an ex-con, the other a single mother.  Over one harrowing night, the unlikely trio must figure out how to quarantine this horror again.  All they have is luck, fearlessness, and a mordant sense of humor.  Will that be enough to save all of humanity?

“On every level, Cold Storage is pure, unadulterated entertainment.” —Douglas Preston, #1 New York Times bestselling author
“Cold Storage is sheer thrillery goodness and riotously entertaining.” —Blake Crouch, New York Times bestselling author
“A classic nerve-shredder, written with all the pace and sudden switches you would expect from a screenwriter like Mr. Koepp.” —Wall Street Journal
“Has a decidedly cinematic quality.” —Tor.com
“A thriller of breakneck speed, Cold Storage will be an engaging read that fans of Blake Crouch’s Dark Matter could devour in one sitting.” —Ars Technica
“[A] propulsive disaster tale…Koepp keeps a tight focus on three characters…Roberto, Travis, and Naomi are engaging, believable characters. Koepp is skilled at sharp, often humorous dialogue, and Roberto’s discovery of the physical barriers to being a hero at age sixty-eight is both darkly funny and an effective source of suspense.” —Kirkus Reviews (starred review)
“A sensational SF thriller.” —Publishers Weekly
“An ultra-flammable combination of science-based horror, primal nightmare-level terror, and unrelenting action, cunningly tied together by indelible characters and a satisfyingly sly, knowing sense of humor.” —Steven Soderbergh, Academy Award–winning director

David Koepp is a celebrated American screenwriter and director best known for his work on Jurassic Park, Spider-Man, Panic Room, and War of the World. His work on screen has grossed over $6 billion worldwide.