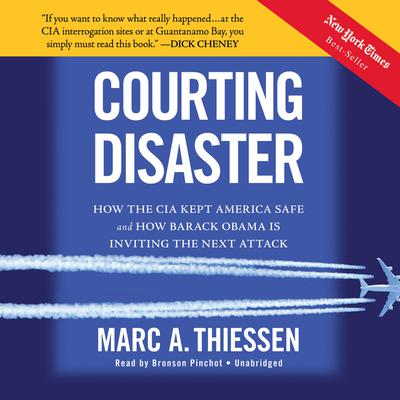 Courting Disaster: How the CIA Kept America Safe and How Barack Obama Is Inviting the Next Attack

By Marc A. Thiessen
Read by Bronson Pinchot

Marc Thiessen knows more than almost anyone outside the CIA about what went on at CIA “black sites” and at the detention center at Guantanamo Bay, Cuba. As chief speechwriter for President Bush, he was given unprecedented access to some of the most sensitive intelligence our government possessed on al-Qaeda terrorists. He has since spent countless hours interviewing the men and women involved in the interrogations at every level—from Vice President Dick Cheney to the interrogators themselves. What he reveals is a shocking, thoroughly documented account of just how close we came to suffering more 9/11-like attacks, and how so-called “enhanced interrogation techniques,” including waterboarding, were directly responsible for unearthing the actionable intelligence that foiled them. He also shows the extraordinary measures the Bush administration took to stay well within the bounds of what was not only legally, but morally right. America’s dedicated intelligence professionals went head-to-head with the world’s most dangerous terrorists and won—but now Barack Obama wants to put them at risk of prosecution for defending our country. Worse, by dismantling this successful CIA program and exposing its secrets to our enemies, he is inviting disaster for America.

MARC THIESSEN’S fifteen-year national security career has taken him from Capitol Hill to the Pentagon and the West Wing, where he served on the White House senior staff as chief speechwriter to President George W. Bush.