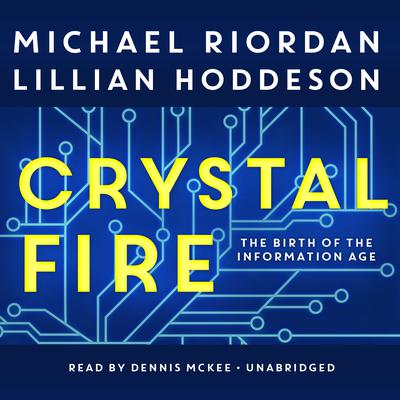 Crystal Fire: The Birth of the Information Age

By Michael Riordan and Lillian Hoddeson
Read by Dennis McKee

On December 16, 1947, two physicists at Bell Laboratories, John Bardeen and Walter Brattain, jabbed two electrodes into a sliver of germanium half an inch long. The electrical power coming out of that piece of germanium was 100 times stronger than what went in. In that moment, the transistor was invented and the information age began.

Crystal Fire recounts the story of the transistor team at Bell Labs, led by William Shockley, who shared the Nobel Prize with Bardeen and Brattain. While his colleagues went on to other research, Shockley grew increasingly obsessed with the new gadget. He went on to form the first semiconductor company in what would become Silicon Valley.

Above all, Crystal Fire is a tale of the human factors in technology: the pride and jealousies coupled with scientific and economic aspirations that led to the creation of modern microelectronics and ignited the greatest technological explosion in history.

“Without the invention of the transistor, I’m quite sure that the PC would not exist as we know it today.” —Bill Gates
“Thoroughly accessible to lay readers as well as the techno-savvy…A fine book.” —Publishers Weekly
“A gripping read and a crash course in the dizzying complexity of information-age invention.” —Amazon.com review
“This book of ‘history in the making’ fascinates.” —AudioFile

Michael Riordan has authored, coauthored, and edited a number of scientific books, including Crystal Fire and The Hunting of the Quark, which won the American Institute of Physics Science Writing Award. In 2002, he received the Andrew Gemant Award of the American Institute of Physics for his contributions to the understanding of physics and its relationship to the wider culture. He lives in Santa Cruz, California.

Lillian Hoddeson is the Thomas M. Siebel Professor of History of Science at the University of Illinois, Urbana–Champaign. She is the coauthor of Crystal Fire.