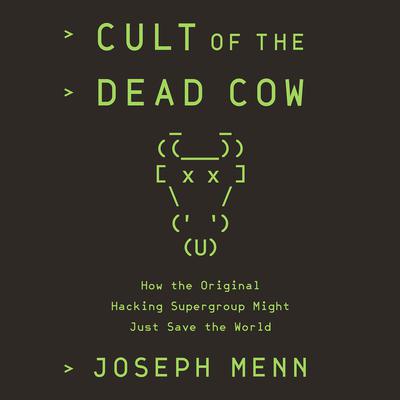 Cult of the Dead Cow: How the Original Hacking Supergroup Might Just Save the World

The fast-paced, riveting story of the hacking collective that turned security technology into a force for good and is fighting back against corporations and countries that are going after our privacy, freedom and even our democracy itself.

Cult of the Dead Cow is the story of the oldest, most respected and most famous American hacking group of all time. Its members invented the concept of hacktivism, released both the top tool for cracking passwords and the reigning technique for controlling computers from afar, and spurred development of Snowden's anonymity tool of choice. With its origins in the earliest days of the Internet, the cDc is full of oddball characters-activists, artists, and musicians-who are now woven into the top ranks of the American establishment.

Today, this small group and their followers represent the best hope for making technology a force for good instead of for surveillance and oppression. Like a modern (and real) illuminati, cDc members have had the ears of presidents, cabinet members, and the CEO of Google. Cult of the Dead Cow shows how we got into the mess we find ourselves in today, where governments and corporations hold immense power over individuals, and how we are finally fighting back.

“Menn has crafted a fascinating high-tech whodunit that educates even as it entertains.” —Bloomberg Businessweek

Joseph Menn covers cybersecurity and other technology issues for Reuters. Before that, he was technology reporter for the Financial Times, after a decade on the same beat for the Los Angeles Times. He is the author two books, Fatal System Error and All the Rave: The Rise and Fall of Shawn Fanning’s Napster and a two-time finalist for the Gerald Loeb Award, the top prize in business reporting.