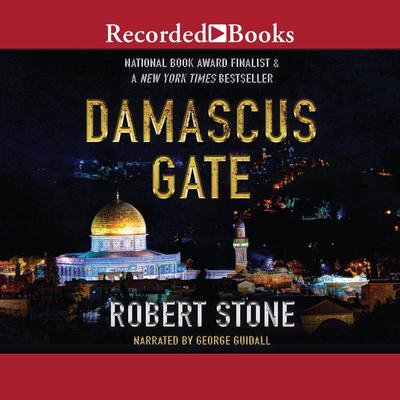 Robert Stone receives critical acclaim for the philosophical layers of his writing as well as the intensity of his multidimensional characters. Setting this deeply provocative, best-selling novel in modern day Jerusalem, Stone puts a disillusioned American journalist adrift in the supercharged atmosphere at the end of the millennium. Christopher Lucas, unsure of his own beliefs, is wandering through Jerusalem, working on an article about religious mania. When he meets Sonia Barnes, dusky nightclub singer, devoted Sufi and mystic, he is entranced. As Sonia helps Lucas meet some of the visionaries and gurus who fill the city, the two suddenly find that they have become pawns in a fanatical bombing plot. Its target is no less than the Temple Mount, the ancient city's holiest site. Through visions ranging from Armageddon to Paradise, Damascus Gate captures the whirlwinds of spiritual fervor that swirl through Jerusalem. George Guidall's narration adds dramatic shadings to the physical and psychological landscapes Lucas traverses in this crossroad of nations.

Robert Stone (1937–2015) received most of the accolades and awards possible for a contemporary novelist, and he has been called the best writer of the post-Vietnam era. His many novels, which have enjoyed commercial success as well as critical acclaim, include the National Book Award winner Dog Soldiers, Damascus Gate, Bay of Souls, and A Hall of Mirrors. He was also the author of the short story collection Bear and His Daughter, which was a finalist for the Pulitzer Prize.