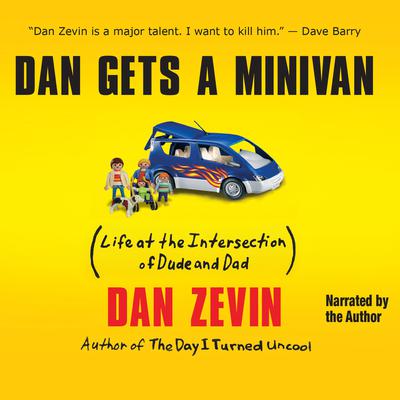 Dan Gets a Minivan: Life at the Intersection of Dude and Dad

Winner of the 2013 Thurber Prize for American Humor

In the bestselling and beloved tradition of Dave Barry, a coming-of-middle-age tale by Thurber finalist Dan Zevin, master of "Seinfeld-ian nothingness" (Time) about a man's inevitable transition into midlife and fatherhood. The least hip citizen of Brooklyn, Dan Zevin has a working wife, two small children, a mother who visits each week to "help," and an obese Labrador mutt who prefers being driven rather than walked. How he got to this point is a bit of a blur. There was a wedding, and then there was a puppy. A wife was promoted and transferred to New York. A townhouse. A new baby boy. A new baby girl. A stay-at-home dad was born. A prescription for Xanax was filled. Six years passed in six seconds. And then came the minivan. Not just a daddy book, Dan Gets a Minivan is about a guy who happens to be a dad. Acclimating to adulthood has never been his strong suit, and this slice-of-midlife story chronicles the whole hilarious journey—from instituting date night to joining Costco; from touring Disneyland to recovering from knee surgery; from losing ambition to gaining perspective. Where it's all heading is anyone's guess, but, for Dan, suburbia's calling—and his minivan has GPS.

“This is the funniest book about parenting I’ve read in a long, long time. Dan Zevin is a major talent. I want to kill him.” —Dave Barry, New York Times bestselling author
“Dan Zevin yanks the car seats and the sippy cups out of that minivan and sticks a blow Hemi dragster engine back there—I mean in his prose style. In his lifestyle it’s, um … a different matter.” —P. J. O’Rourke, New York Times bestselling author
“Zevin is one hilarious house-husband—like Seinfeld for the stay-at-home-dad set. Raise a sippy cup and cheer him on.” —People
“Dave Barry has made a career of writing about Dave Barry. P. J. O’Rourke writes about P. J. O’Rourke. And David Sedaris writes about David Sedaris and the strange Sedaris clan into which he was born. You could throw Zevin in with any of them and he would hold his own. He might even float to the top.” —USA Today
“Zevin, in the grand tradition of humorists, has made the most of his failures…What elevates his work above mere irreverence is the quality of insight he brings to relatively familiar terrain.” —Boston Globe
“Zevin is a poster boy for egalitarian—even feminist—fatherhood. But at the same time, he presents himself as a loving goof-off: a guy who’s picked the most enjoyable option—parenting—over working a high-powered, full-time job…With nods to Woody Allen and Larry David, Zevin has forged a persona of half-dorky (yet all-devoted) Jewish dad that’s endearing.” —Forward
“It’s a book about a regular guy taking his first tentative, sometimes scary steps toward being a fully formed adult, and it is always funny and sometimes laugh-out-loud hilarious…Highly recommended to fans of Barry, Roy Blount, and Bill Geist.” —Booklist

Dan Zevin has been a comic correspondent for National Public Radio’s WBUR, the humor columnist for Boston magazine and the Boston Phoenix, and a contributor to publications such as Rolling Stone, Maxim, Details, Glamour, Elle, and Parenting. A Thurber Prize for American Humor finalist for The Day I Turned Uncool: Confessions of a Reluctant Grown-up, he is also the author of Entry-Level Life and The Nearly-Wed Handbook. Dan lives with his wife and their two children in the suburbs of New York City. He is an active member of his local Costco.