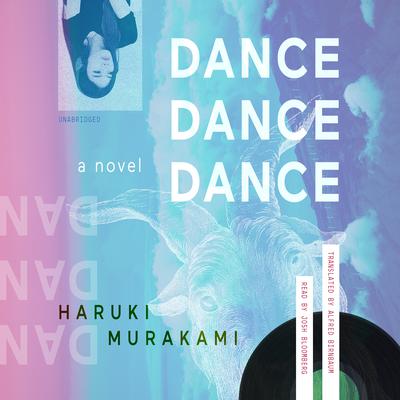 In this propulsive novel, one of the most idiosyncratically brilliant writers at work in any language fuses science fiction, the hard-boiled thriller, and white-hot satire into a new element of the literary periodic table.

As he searches for a mysteriously vanished girlfriend, Haruki Murakami’s protagonist plunges into a wind tunnel of sexual violence and metaphysical dread in which he collides with call girls, plays chaperone to a lovely teenaged psychic, and receives cryptic instructions from a shabby but oracular Sheep Man.

Dance Dance Dance is a tense, poignant, and often hilarious ride through the cultural Cuisinart that is contemporary Japan, a place where everything that is not up for sale is up for grabs.

“Josh Bloomberg’s narration strikes the right balance between detachment and obsession…Bloomberg’s voice—fittingly reserved, a blend of intelligence and sadness—navigates listeners through the coffee shops and hotel lobbies of contemporary Japan as the story takes unexpected, dreamlike turns.” —AudioFile
“A Japanese Phillip K. Dick with a sense of humor…[Murakami belongs] in the topmost ranks of writers of international stature.” —Newsday
“[Murakami’s] writing injects the rock ‘n’ roll of everyday language into the exquisite silences of Japanese literary prose.” —Harper’s Bazaar
“The plot is addictive.” —Detroit Free Press
“Has the fascination of a well-written detective story combined with a surreal dream narrative…full of appealing, well-developed characters.” —Philadelphia Inquirer
“An entertaining mix of modern sci-fi, nail-biting suspense, and ancient myth…a sometimes funny, sometimes sinister mystery spoof…[that] also aims at contemporary human concerns.” —Chicago Tribune
“All the hallmarks of Murakami’s greatness are here: restless and sensitive characters, disturbing shifts into altered reality, silky smooth turns of phrase, and a narrative with all the momentum of a roller-coaster.” —Publishers Weekly
“If Kafka were to find himself imprisoned in a novel that had been written by Raymond Chandler and was then forced to develop a sense of humor, the resultant voice might likely resemble that of the protagonist in this latest delight from one of Japan’s leading contemporary writers…Recommended for all serious fiction collections.” —Library Journal

Haruki Murakami is a Japanese author of fiction and nonfiction works. His books and stories have been bestsellers in Japan as well as internationally, with his novel Colorless Tsukuru Tazaki and His Years of Pilgrimage topping the New York Times bestsellers list in 2014. His work has been translated into more than fifty languages. Murakami is the recipient of numerous awards, including the World Fantasy Award, the Frank O’Connor International Short Story Award, the Franz Kafka Prize, and the Jerusalem Prize.