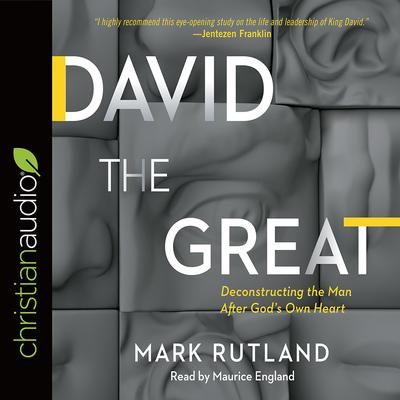 David the Great: Deconstructing the Man After God's Own Heart

KING DAVID was a complicated, conflicted man of flesh. But too often he is viewed as an Americanized shepherd boy on a Sunday school felt board or a New Testament saint alongside the Virgin Mary. Not only does this neglect one of the Bible’s most complex stories of sin and redemption; it also bypasses the gritty life lessons inherent in the amazing true story of David. Mark Rutland shreds the felt-board character, breaks down the sculpted marble statue, and unearths the real David of the Bible. Both noble and wretched, neither a saint nor a monster, at times victorious and other times a failure, David was through it all a man after God’s own heart.

Mark Rutland, PhD, is a New York Times best selling author and columnist for Ministry Today magazine. He is president of Global Servants and the National Institute of Christian Leadership, having served previously as the pastor of a mega-church and president of two universities. Rutland and his wife, Alison, have been married and in ministry together for more than fifty years. They have three children and nine grandchildren. Through their ministry Global Servants the Rutlands established House of Grace home for tribal girls in Chiang Rai, Thailand to protect little girls from sex trafficking. Since 1986 House of Grace has been “saving little girls for big destinies.” Its work in West Africa, largely in remote villages, has built churches and village hygiene services in five countries. For speaking appointments Rutland is represented by Premiere Speakers Bureau.