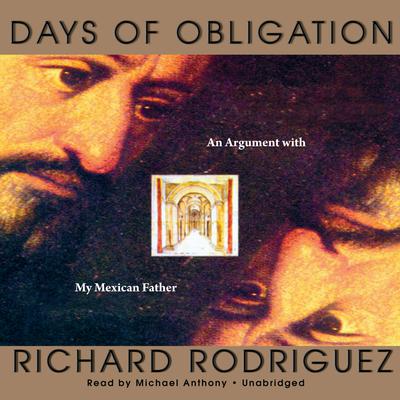 Days of Obligation: An Argument with My Mexican Father

Finalist for the 1993 Pulitzer Prize for General Nonfiction

In a series of ten essays spanning the five centuries of history, from Cort├®s' conquest of Mexico to San Francisco's AIDS epidemic, Rodriguez explores the conflicts of race, religion, and cultural identity for Mexican-Americans across the landscape of his beloved California—as well as the impact this history had on him.

“Days of Obligation looks into America—north and south of the Rio Grande—as penetratingly and eloquently as Camus did when he compared the mental landscapes of France and Algiers.” —Los Angeles Times Book Review
“Luminous…[Rodriguez’s] insights, irony and descriptions make the writing richly evocative.” —Publishers Weekly
“The best American essayist as far as I’m concerned…[Rodriguez] doesn’t kowtow to political correctness. He shuns the pack, rides alone. He writes a lonely line of individualism, the grandeur and grief of the American soul.” —Village Voice
“The best American essayist.” —Village Voice

Richard Rodriguez was born in 1944 in San Francisco. He received a BA from Stanford University and an MA from Columbia University, was a PhD candidate in English Renaissance at the University of California at Berkeley, and attended the Warburg Institute in London on a Fulbright fellowship. Rodriguez has worked as a teacher, international journalist, and educational consultant.