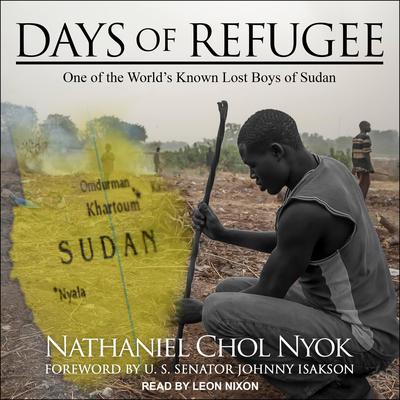 Days of Refugee: One of the World’s Known Lost Boys of Sudan

In 1987, Nathaniel Nyok, tormented by thoughts of missing parents and siblings, fled a bloody scene and a burning village in Sudan. Wishing to live at any cost and driven by a confrontational heart-pounding fear, he journeyed through the wild to seek sanctuary in Ethiopia. At eight, he had just capitulated to an orphan-like life with a new title, A Lost Boy of Sudan, living in a refugee camp for fourteen years without a family and a future. The refugee camp became a cage that was too confining, and he languished with a sense of loss. As he battled the loss of home and family, he chose education over revenge as the road to freedom, a road that eventually brought him to America, land of freedom and rules, welcomes and prejudices. In a turning point of surreptitious blessing, grilled by United States immigration lawyers and medical experts in a two-year vetting process of interviews and medical evaluations, he was offered an approval letter, becoming one of a few Lost Boys admitted to the United States. In 2001, he resettled in Atlanta, Georgia, in a community that welcomed him, a stranger, with both joy and contempt. This story portrays his transition to American culture—from the stylishness and glam of Hollywood to battling the prejudices of his new community—as a time of both confusion and hope.