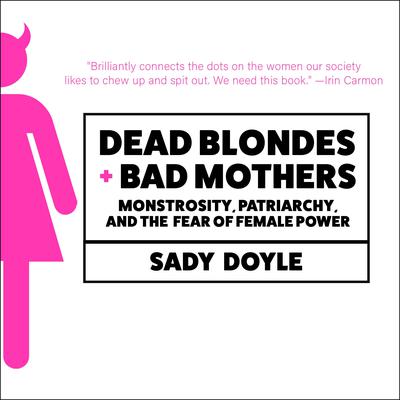 Dead Blondes and Bad Mothers: Monstrosity, Patriarchy, and the Fear of Female Power

Women have always been seen as monsters. Men from Aristotle to Freud have insisted that women are freakish creatures, capable of immense destruction.

Sady Doyle, hailed as "smart, funny, and fearless" by the Boston Globe, takes listeners on a tour of the female dark side, from the biblical Lilith to Dracula's Lucy Westenra, from the T-Rex in Jurassic Park to the teen witches of The Craft. She illuminates the women who have shaped our nightmares: Serial killer Ed Gein's "domineering" mother Augusta; exorcism casualty Anneliese Michel, starving herself to death to quell her demons; author Mary Shelley, dreaming her dead child back to life.

These monsters embody patriarchal fear of women, and illustrate the violence with which men enforce traditionally feminine roles. They also speak to the primal threat of a woman who takes back her power. In a dark and dangerous world, Dead Blondes and Bad Mothers asks women to look to monsters for the ferocity we all need to survive.

“It’s smart, fascinating, and thoughtful, and Cannon’s brilliant narration makes it incredibly easy to sink into.” —Book Riot
“This book is brilliant as it is frightening. A must read for all fans of horror.” —Tor.com
“A deep dive into misogyny in popular culture…Unflinching, hard-charging feminist criticism.” —Kirkus Reviews (starred review)