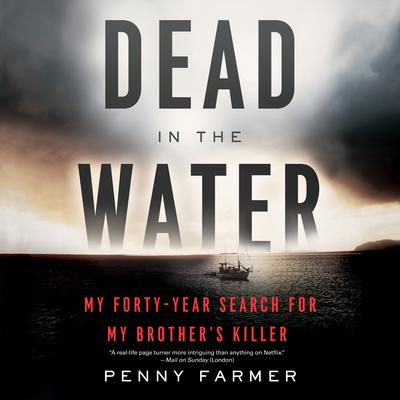 Dead in the Water: My Forty-Year Search for My Brother’s Killer

By Penny Farmer
Read by Tess Gallagher  and Ian Porter

In this shocking, heart-wrenching true-crime drama, a forty-year-old double murder brings together a grieving family and two brothers—just kids when they witnessed their father commit the brutal act—to track down a psychopath once suspected as being the Golden State Killer

In 1978, two tortured corpses were discovered in the sea off Guatemala. Hooded, bound with ropes and weighted down with heavy engine parts, Chris Farmer and his girlfriend Peta Frampton were still clinging to life when they were thrown from a yacht on which they had been crewing.

This is the gripping account of how Chris’s family painstakingly gathered evidence against the boat’s Californian skipper, Silas Duane Boston, working alongside the FBI, Interpol, and police in the UK and the USA. Almost four decades later in 2015, there was a major breakthrough in the case when, using Facebook, Chris’s sister Penny tracked Boston down. Following the testimony of his two sons who, as young boys, had witnessed the horrific murder of Chris and Peta at the hands of their father, Boston was finally arrested and charged with two counts of maritime murder.

Chillingly, Boston was later linked to several other killings on US soil—at one point he was even the FBI’s prime suspect in the notorious Golden State Killer case, until DNA ruled him out. The list of crimes for which he was suspected put him in the league of America’s most prolific and elusive serial killers.

Not just a story of murder on the high seas, Dead in the Water is a tale that offers insights into the minds of the killer and his two sons. And it reveals a family’s fortitude and diligence in tracking down a monster of a man, a task which ultimately fell to the author to complete. It exemplifies that life can be senselessly snuffed out but love never dies.

“A real-life page turner more intriguing than anything on Netflix.” —Mail on Sunday (London)
“[A story] almost too mad to make up, too good not to tell, and which one day, no doubt, will be a film.” —BBC World News USA and Canada
“This engrossing, heartbreaking story is sure to appeal to true crime fans.” —Publishers Weekly

Penny Farmer was raised in Manchester, and graduated with an English Literature degree from Lancaster University and then moved to London to study for a Postgraduate Certificate in Journalism at City University. Experiencing something of a baptism of fire as a reporter on a North London local newspaper at the time of the Broadwater Farm Estate riots in Tottenham in 1985, she learned the trade and knew that writing was in her soul. She has also served as an editor for Woman magazine. Penny is now a freelance journalist and public-relations consultant.