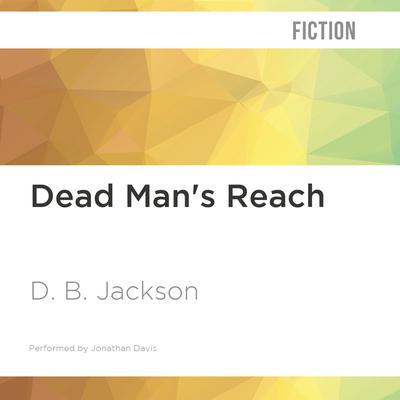 By D. B. Jackson
Read by Jonathan Davis

Let the battle for souls begin in Dead Man's Reach, the fourth standalone novel in D. B. Jackson's acclaimed Thieftaker series. Boston, 1770: The city is a powder keg, as tensions between would-be rebels and loyalist Tories approach a breaking point, and one man is willing to light the match that sets everything off to ensure that he has his revenge. The presence of the British regulars has made thief taking a hard business to be in, and the jobs that are available are reserved for Sephira Pryce. Ethan Kaille has to resort to taking on jobs that he would otherwise pass up, namely protecting the shops of Tories from patriot mobs. But when one British loyalist takes things too far and accidentally kills a young boy, even Ethan reconsiders his line of work. Even more troubling is that instances of violence in the city are increasing, and Ethan often finds himself at the center of the trouble. Once Ethan realizes why he is at the center of all the violence, he finds out that some enemies don't stay buried and will stop at nothing to ruin Ethan's life. Even if that means costing the lives of everyone in Boston, including the people Ethan loves most.

“Jackson deftly mixes in the chaos of the Boston Massacre and the sobering realities of colonial street life, presenting a hero who is driven yet reflective on his responsibilities.” —Publishers Weekly

D. B. Jackson is the award-winning author of They Rode Good Horses, Unbroke Horses, and Small Moving Parts, as well as several short stories published by High Hill Press, La Frontera Publishing, and others. His screenplays include the television series adaptation of They Rode Good Horses, the feature film adaptation of Unbroke Horses, and a feature film entitled Half Past Nine, inspired by the short story, Last of the Cowboys. His television regular series original screenplays include an international political drama set in Las Vegas, Washington, DC, and Kazakhstan, as well as an action/sci-fi thriller set in Los Angeles. Jackson’s first two novels were recognized by the literary community with the following awards: the Western Heritage Wrangler Award, Will Rogers Medallion Gold Medal (twice), Laramie Award (twice), Laramie Grand Prize, Eric Hoffer Award, Peacemaker Award, and the ReadWest Excellence in Western Literature honor.