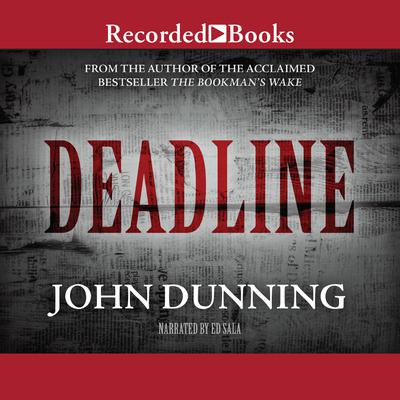 John Dunning captured top places on national best-seller lists with The Bookman's Wake, a New York Times notable book of the year that prompted one critic to comment, "John Dunning writes stunningly good mysteries." Deadline is a suspenseful tale that begins in a dusty newsroom, but spins out into a dark world of conspiracy and murder. Although Dalton Walker is an award-winning journalist, his attempt to write fiction has gone nowhere. So he hires on at a small New Jersey newspaper, the Tribune, hungry again for the excitement of headlines and hard-hitting features. His job begins with covering a child's death in a fire and a showgirl's Amish background. But these routine assignments soon lead the reporter in unexpected directions-deep into disturbing new emotions, and back into his own turbulent past. As Walker tries to obey his reporter's instinct, the risks mount with each piece of information he gathers. These deadlines could be a death sentence.

John Dunning has revealed some of book collecting’s most shocking secrets in his bestselling series of crime novels featuring Cliff Janeway. Those books have won the prestigious Nero Wolfe Award, been New York Times Notable Books, and becoming New York Times and Book Sense bestsellers. Dunning is also the author of the Edgar Award–nominated Deadline, The Holland Suggestions, and Two O'Clock, Eastern Wartime. An expert on rare and collectible books, he owned the Old Algonquin Bookstore in Denver for many years. He is also an expert on American radio history and the author of On the Air: The Encyclopedia of Old-Time Radio. His other jobs have included glass cutter, racetrack groom, and political publicist. He lives in Denver, Colorado.