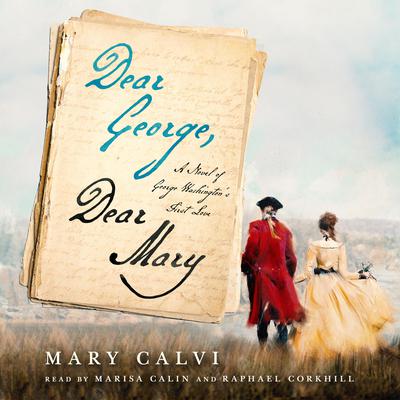 By Mary Calvi
Read by  Marisa Calin  and Raphael Corkhill

“Love is said to be an involuntary passion, and it is, therefore, contended that it cannot be resisted.” —George Washington

Did unrequited love spark a flame that ignited a cause that became the American Revolution? Never before has this story about George Washington been told. Crafted from hundreds of letters, witness accounts, and journal entries, Dear George, Dear Mary explores George’s relationship with his first love, New York heiress Mary Philipse, the richest belle in Colonial America.

From elegant eighteenth-century society to bloody battlefields, the novel creates breathtaking scenes and riveting characters. Dramatic portraits of the two main characters unveil a Washington on the precipice of greatness, using the very words he spoke and wrote, and his ravishing love, whose outward beauty and refinement disguise a complex inner struggle.

Dear George, Dear Mary reveals why George Washington had such bitter resentment toward the Brits, established nearly two decades before the American Revolution, and it unveils details of a deception long hidden from the world that led Mary Philipse to be named a traitor, condemned to death and left with nothing. While that may sound like the end, ultimately both Mary and George achieve what they always wanted.

“Narrator Raphael Corkhill captures the essence of Washington…Corkhill’s accent is slightly British, his voice clear and pleasing. Mary’s narrative is performed by Marisa Calin, who uses a high-pitched girlish voice for the naïve Mary. The dialogue is flowery, even stilted at times, but the narrators make the characters wholly believable. Winner of the AudioFile Earphones Award.” —AudioFile
AudioFile Magazine Earphones Award winner —
“Calvi reimagined their story after poring over letters, witness accounts, and journal entries.” —Library Journal
“Calvi’s debut skillfully depicts the ill-fated love story…[an] affecting narrative.” —Publishers Weekly
"Calvi’s portrait of Washington as an earnest young man striving for success but beleaguered on every front is convincing and, in a way, endearing. It is also a fascinating and unique look at pre-Revolutionary War society, with its misunderstandings and simmering resentments and notable for the author’s use of contemporaneous documents.” —Booklist