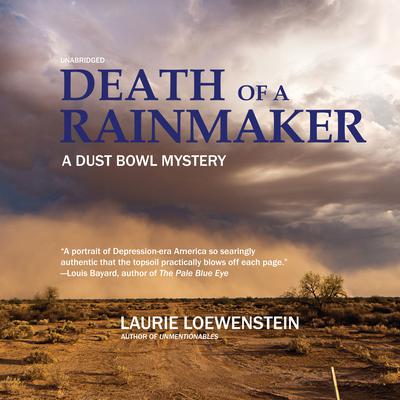 Death of a Rainmaker: A Dust Bowl Mystery

When a rainmaker is bludgeoned to death in the pitch-blackness of a colossal dust storm, small-town sheriff Temple Jennings shoulders yet another burden in the hard times of the 1930s Dust Bowl. The killing only magnifies Temple’s ongoing troubles: a formidable opponent in the upcoming election, the repugnant burden of enforcing farm foreclosures, and his wife’s lingering grief over the loss of their eight-year-old son.

As the sheriff and his young deputy investigate the murder, their suspicions focus on a teenager, Carmine, serving with the Civilian Conservation Corps. The deputy, himself a former CCCer, struggles with remaining loyal to the corps while pursuing his own aspirations as a lawman.

When the investigation closes in on Carmine, Temple’s wife, Etha, quickly becomes convinced of his innocence and sets out to prove it. But Etha’s own probe soon reveals a darker web of secrets, which imperil Temple’s chances of reelection and cause the husband and wife to confront their long-standing differences about the nature of grief.

“Beautifully captures the devastation of the land and people in the Dust Bowl.” —Publishers Weekly (starred review)
“Loewenstein’s sensitive treatment of these dark days in the Dust Bowl era offers little humor but a whole lot of compassion.” —New York Times Book Review
“Laurie Loewenstein’s vivid Death of a Rainmaker is at once an engrossing yarn, an elegant inquiry into human desperation, and a portrait of Depression-era America so searingly authentic that the topsoil practically blows off each page.” —Louis Bayard, author of The Pale Blue Eye
“Reading Death of a Rainmaker is like slipping through time right into a 1930s black-and-white movie…Laurie Loewenstein has a knack for writing the early twentieth century. I sure hope this is a series, because I’m smitten.” —Robin Oliveira, author of The Winter Sisters
“An authentic tale of the drought-stricken southern plains, and a lovingly and eloquently told murder mystery. It is not only the unfolding plot and the metaphorical obscuring of truth by dust, but Loewenstein’s masterful prose—with its tender language and skillful resonance—that will captivate readers and keep them enthralled. Death of a Rainmaker is both a gripping tale of murder and a glimpse into resilience and love in a time of savage loss, scarcity, and fear.” —Leslie Schwartz, author of The Lost Chapters
“Laurie Loewenstein takes your breath away. Her haunting and vivid prose deftly describes the opening chords of a dust storm that left families sick with dust pneumonia or dead broke. In this gripping tale of a sheriff searching for a killer in a dying town, Loewenstein rounds up characters with true grit, cunning, and kindness.” —Mary Kay Zuravleff, author of Man Alive!
“A jewel of a novel. The scenes and characters are so vivid and alive that you forget that the Internet and interstate roads haven’t been around forever. Loewenstein is a born storyteller who writes scholarly based page-turners…It’s a read you won’t forget.” —John Bowers, author of Love in Tennessee

Laurie Loewenstein is the author of the bestselling novel Unmentionables. An Ohio native, she currently lives in Columbia, Maryland.