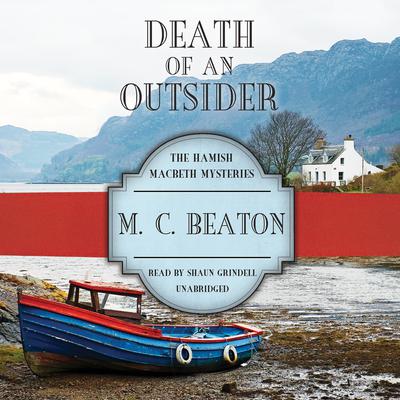 Death of an Outsider

The most hated man in the most dour town in Scotland is sleeping with the fishes, or—more accurately—has been dumped into a tank filled with crustaceans. All that remains of the murdered victim are his bones. But once the lobsters have been shipped off to Britain's best restaurants, the whole affair quickly lands on the plate of Constable Hamish Macbeth.

Exiled to the dreary outpost of Cnothan, Macbeth sorely misses his beloved Lochdubh, but before he can head back home he has to contend with a detective chief inspector who wants the murder hushed up, a dark-haired lassie who is out to seduce him, and a killer who has made mincemeat of his last victim—and will no doubt strike again.

“The characterization is wryly humorous, while a horde of ravenous lobsters give the plot a wildly ghoulish twist. Jaundiced views on love and marriage abound, and the visiting constable finds himself doubling as the local psychiatrist among this amusing cast of eccentrics.”  —Publishers Weekly
“Another case for charming Scottish constable Hamish MacBeth, this time away from his beloved village of Lochdubh, doing a three-month stint as relief to Sergeant MacGregor in the gray, bleak crofting town of Cnothan…Vividly drawn characters, a sharp evocation of a sour town, and Hamish’s warmth and dry wit make for easygoing enjoyment.”           —Kirkus Reviews