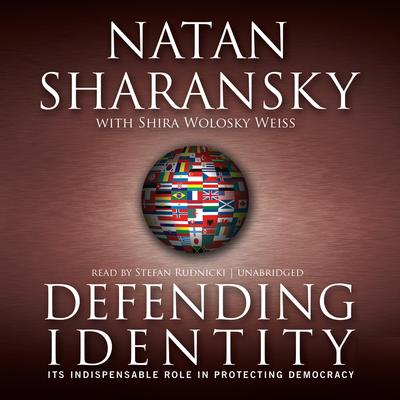 Natan Sharansky believes that the challenge of the twenty-first century is to assert our cultural, ethnic, or religious identities, a struggle that has never been more important than now.

Who is better prepared to defend principles in a volatile world? Is it those with strong national, religious, ethnic, or tribal identities who accept democracy, or democrats who view identity as a divisive prejudice? Sharansky argues that valueless cosmopolitanism is dangerous, even in democracies. Together, identity and democracy assert a powerful and benign sense of purpose, but when at odds, they beget fundamentalism and rootlessness.

“Some of the liveliest and most illuminating sections of the book are anecdotes of Mr. Sharansky’s meetings...One appreciates Mr. Sharansky’s flashes of humor.” —New York Sun
“If the next American president reads this latest book by Mr. Sharansky on the interplay between identity, democracy, and freedom, it could be more important than any CIA or State Department briefing in understanding the foreign policy horizon.” —Ira Stoll, editor of FutureOfCapitalism.com
“Stefan Rudnicki’s deep voice enables a stronger foreboding tone for Sharansky’s words. His light use of accents for quotes provides context without exaggeration. Most important, Rudnicki patiently works through the text with shifting emphasis and pauses to allow for listener understanding during the more cerebral elements of Sharansky’s writings.” —Publishers Weekly
“Stefan Rudnicki’s narration is clear and well paced. His voice, which seems somehow to capture the whole of human experience in every sentence, gives life to Sharansky’s logic. After nine years in Soviet prison and many more defending Israel against enemies and detractors, Sharansky still maintains his sense of humor and of hope.” —AudioFile

Natan Sharansky, writer, former Soviet dissident, and former deputy prime minister of Israel, was awarded the Congressional Gold Medal in 1986 for his struggles against tyranny. He is a distinguished fellow at the Shalem Center, heading its strategic studies institute, and is president of Beit Hatefutsot, the Jewish diaspora museum.