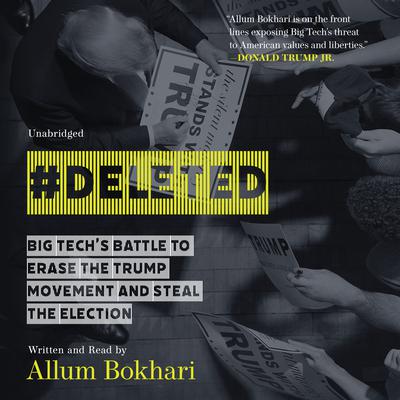 #DELETED: Big Tech's Battle to Erase the Trump Movement and Steal the Election

Conservative journalist Allum Bokhari examines how the liberal-leaning elites of Silicon Valley have completely overtaken social media, creating a crisis for privacy and freedom of expression.

In the beginning, the entrepreneurs who created the internet wanted to disrupt an old, oppressive system. They wanted to ensure that everyone -- no matter their social standing or level of education -- could have a voice. Today, those same entrepreneurs are in control, and they've created an oppressive system of their own. Companies like Google, Facebook, and Twitter are more powerful than most governments. They censor conservative voices. They ban content they don't like. They hide the profiles of users whose views don't align with their own.

In #DELETED, Allum Bokhari tells the story of how this happened, and warns us what could happen if we don't do something about it.