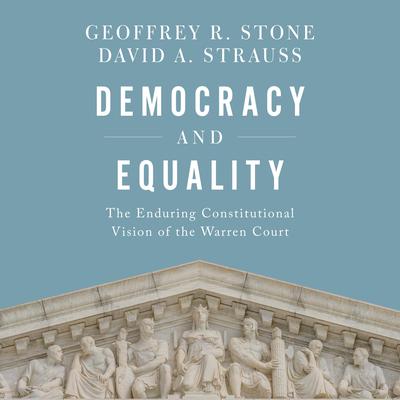 Democracy and Equality: The Enduring Constitutional Vision of the Warren Court

By Geoffrey R. Stone  and David A. Strauss
Read by Tom Perkins

From 1953 to 1969, the Supreme Court under Chief Justice Earl Warren brought about many of the proudest achievements of American constitutional law. The Warren Court declared racial segregation and laws forbidding interracial marriage to be unconstitutional; it expanded the right of citizens to criticize public officials; it held school prayer unconstitutional; and it ruled that people accused of a crime must be given a lawyer even if they can't afford one. Yet, despite those and other achievements, conservative critics have fiercely accused the justices of the Warren Court of abusing their authority by supposedly imposing their own opinions on the nation.

As the eminent legal scholars Geoffrey R. Stone and David A. Strauss demonstrate in Democracy and Equality, the Warren Court's approach to the Constitution was consistent with the most basic values of our Constitution and with the most fundamental responsibilities of our judiciary. Stone and Strauss describe the Warren Court's extraordinary achievements by reviewing its jurisprudence across a range of issues. In each chapter, they tell the story of a critical decision, exploring the historical and legal context of each case, the Court's reasoning, and how the justices of the Warren Court fulfilled the Court's most important responsibilities.