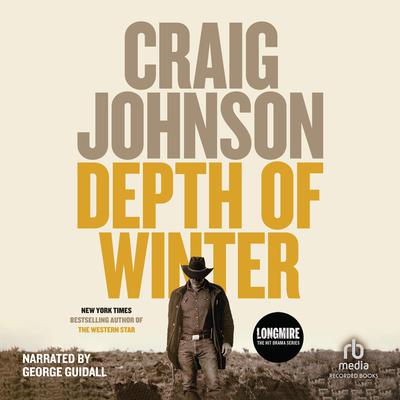 Welcome to Walt Longmire's worst nightmare. In Craig Johnson's latest mystery, Depth of Winter, an international hit man and the head of one of the most vicious drug cartels in Mexico has kidnapped Walt's beloved daughter, Cady, to auction her off to his worst enemies, of which there are many. The American government is of limited help and the Mexican one even less. Walt heads into the one-hundred-and-ten degree heat of the Northern Mexican desert alone, one man against an army.

“George Guidall, the longtime narrator of the series, captures Longmire’s sense of urgency from the outset. Cady, Longmire’s beloved and feisty daughter, has been kidnapped by the baddest of the bad Mexican drug lords, Tomas Bodarte. Walt’s singular focus to get her back is evident in the extreme risks he takes and in Guidall’s pace and tone. Walt’s trademark absurd—often hilarious—problem solving is on full display, and the good-versus-evil struggles of these new characters make for totally satisfying listening.” —AudioFile
“Harrowing…Johnson is in fine form.” —Publishers Weekly (starred review)
“This is a rip-roaring adventure, and if Longmire seems uncannily able to recover from blows to the head and other injuries that would disable a lesser man, well, that’s what it takes to defeat this ‘monster among monsters.’ The sheriff as the spirit of Quixote, riding a mule to the rescue.” —Kirkus Reviews