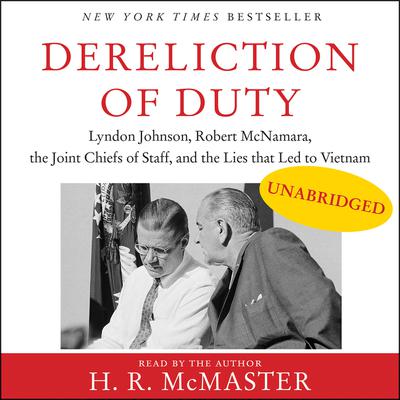 Dereliction of Duty: Johnson, McNamara, the Joint Chiefs of Staff, and the Lies That Led to Vietnam

"The war in Vietnam was not lost in the field, nor was it lost on the front pages of the New York Times or the college campuses. It was lost in Washington, D.C." —H. R. McMaster (from the Conclusion)

Dereliction Of Duty is a stunning analysis of how and why the United States became involved in an all-out and disastrous war in Southeast Asia. Fully and convincingly researched, based on transcripts and personal accounts of crucial meetings, confrontations and decisions, it is the only book that fully re-creates what happened and why. McMaster pinpoints the policies and decisions that got the United States into the morass and reveals who made these decisions and the motives behind them, disproving the published theories of other historians and excuses of the participants.

A page-turning narrative, Dereliction Of Duty focuses on a fascinating cast of characters: President Lyndon Johnson, Robert McNamara, General Maxwell Taylor, McGeorge Bundy and other top aides who deliberately deceived the Joint Chiefs of Staff, the U.S. Congress and the American public.

McMaster’s only book, Dereliction of Duty is an explosive and authoritative new look at the controversy concerning the United States involvement in Vietnam.

“Carefully researched and vividly narrated…It should be read by anyone interested in the origins of one of the great tragedies in American history.” —Stanley Karnow, Pulitzer Prize–winning author of Vietnam: A History
“A must-read autopsy of a war gone wrong.” —New York Times
“Intriguing…Unsparing in his analysis of the chiefs, McMaster takes them severely to task for their ‘failure’ to provide LBJ with ‘their best advice.’ A relentless, stinging indictment of the usual Johnson administration Vietnam War suspects.” —Kirkus Reviews
“A stunning book: eloquent and highly effective. The word noble would not be going too far.” —Paul Fussell, author of The Great War and Modern Memory
“Red hot, brilliantly shows how the American people were conned.” — Colonel David H. Hackworth, United States Army, (Retired)
“[A] comprehensive, balanced, and relentless exploration of the specific role of the Joint Chiefs of Staff…a devastating indictment of Johnson and his principal civilian and military advisers.” —New York Times Book Review
“Well-written and full of enlightening new details, Dereliction of Duty adds significantly to the historical record of a great national failure.” —Washington Post
“A seminal work.” —Wall Street Journal
“Thoroughly researched, clearly written, and forcefully argued.” —Los Angeles Times Book Review
“Brilliant…a penetrating analysis.” —San Francisco Chronicle
“McMaster’s book has drawn high praise from experts…His dogged research unearthed thousands of pages of material denied other historians and writers.” —Seattle Post-Intelligencer
“A sobering, well-written account.” —Barnes&Noble.com
“The generals and admirals who kept silent as America descended into the Vietnam quagmire had many times been in harm’s way. Yet when subjected to a final test, they were unable and unwilling to make the choice demanded of service-academy cadets: the harder right over the easier wrong, whatever the personal cost.” —Publishers Weekly

H. R. McMaster is the Fouad and Michelle Ajami Senior Fellow at the Hoover Institution and Stanford University. He is also the Susan and Bernard Liautaud Fellow at The Freeman Spogli Institute and Lecturer at the Stanford Graduate School of Business. He serves as chairman of the advisory board of the Center on Military and Political Power at the Foundation for Defense of Democracies and the Japan Chair at the Hudson Institute. A native of Philadelphia, he graduated from the United States Military Academy in 1984. He served as a US Army officer for thirty-four years and retired as a lieutenant general in 2018. He remained on active duty while serving as the twenty-sixth assistant to the president for national security affairs. He taught history at West Point and holds a PhD in history from the University of North Carolina at Chapel Hill.