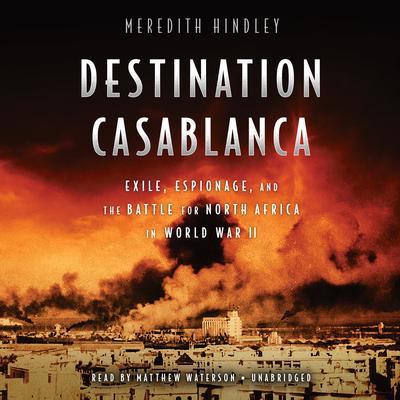 In the summer of 1940, following France’s surrender to Germany, Casablanca was transformed from an exotic travel destination to a key military target. Nazi agents and collaborators soon overran the city looking to capitalize on the new Vichy regime. The resistance was not far behind, as bartenders, shopkeepers, taxi drivers, celebrities, and disgruntled bureaucrats formed a network of Allied spies. Meanwhile, Jewish refugees from Europe flooded the city, hoping to obtain visas to the United States and beyond.

In November 1942, Casablanca’s wartime fate changed in seventy-four hours, when 33,000 American soldiers stormed the beaches of French Morocco as part of Operation Torch. In Allied hands, Casablanca’s port became a crucial logistical hub in British and American plans to return to Europe and defeat Germany. Two months later, Roosevelt and Churchill traveled to Casablanca to plot the next phase of war and achieve Germany’s “unconditional surrender.”

Rife with rogue soldiers, power grabs, plot twists, and diplomatic intrigue, Destination Casablanca is the riveting and untold history of this glamorous and beloved city at the heart of World War II.

“With its lively storytelling and impressive scholarship, Destination Casablanca succeeds as a thorough and highly engaging chronicle of the French Moroccan theater of war.” —Washington Post
“Hindley’s new book tells of the wartime refugee route that inspired a classic…The charmed classic made in Hollywood’s dream factories and the granular history recounted in Hindley’s superb book fundamentally complement each other, entertaining and instructing us with their timeless tales of political intrigue, moral compromise, acts of courage and cowardice.” —New Republic
“A compelling read, packed with a Casablanca-worthy cast of characters and a penetrating look at the inside workings of Vichy France…History buffs will love the colorful stories and the grand geopolitical scheming…[along with] action, intrigue, and adventure." —Foreign Policy
“Rife with rogue soldiers, power grabs, and diplomatic intrigue…Exceptionally well researched, written, organized, and presented, Destination Casablanca is a comprehensive and detailed military history that reads as smoothly and as inherently engaging as any novel.” —Midwest Book Review
“A fulcrum of history—wartime Casablanca—jumps to life in Meredith Hindley’s masterful page-turner. Spies, jazz legends, generals, traitors, writers, war icons and assassins light up a tale of high-stakes intrigue in one of the world’s great exotic settings.” —Jonathan W. Jordan, author of Brothers, Rivals, Victors
“Fascinating characters such as performer Josephine Baker and writer Arthur Koestler, along with a multitude of refugees, spies, and resistance fighters give her account unusual texture and variety…A great read.” —Richard Breitman, distinguished professor emeritus, American University
“An important, well-researched, and well-written account of a major aspect of World War II that is generally neglected in the existing literature.” —Gerhard L. Weinberg, professor emeritus, University of North Carolina

Meredith Hindley is an author, historian, and senior writer for Humanities, the quarterly review of the National Endowment for the Humanities. Her work has also appeared in the New York Times, Salon, Christian Science Monitor, and Barnes and Noble Review. She received her PhD from American University.