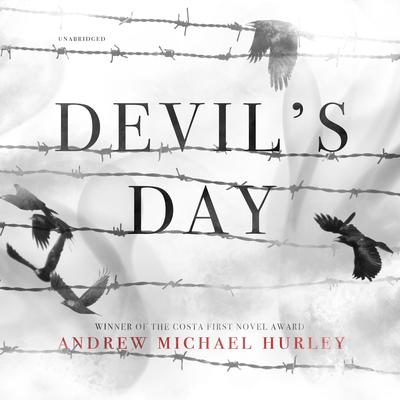 In the wink of an eye, as quick as a flea,
The Devil he jumped from me to thee.
And only when the Devil had gone,
Did I know that he and I’d been one …

Every autumn, John Pentecost returns to the farm where he grew up, to help gather the sheep down from the moors for the winter. Very little changes in the Endlands, but this year, his grandfather—the Gaffer—has died and John’s new wife, Katherine, is accompanying him for the first time.

Each year, the Gaffer would redraw the boundary lines of the village, with pen and paper but also through the remembrance of tales and timeless communal rituals, which keep the sheep safe from the Devil. But as the farmers of the Endlands bury the Gaffer and prepare to gather the sheep, they begin to wonder whether they’ve let the Devil in after all.

“The new master of menace. This chilling follow-up to The Loney confirms its author as a writer to watch…Hurley doesn’t need the Devil’s help to grip you. His taut writing does that for him. Nature’s routine cruelties are caught with a fierce accuracy that Ted Hughes would have admired.” —Sunday Times (London)
“This is a story with pull. Its lively, building sense of evil is thoroughly entangled with the assumptions of the way of life depicted, that apparently timeless relationship of the smallholder and the moor. As the young Adam soaks up his father’s tales of the Devil, he’s also learning how to manage the local landscape, how to live in, identify with and take responsibility for the Endlands. These two types of knowledge, the symbolic and the practical, are presented as distinct but interdependent…The devil flickers and dances in the woods, and John Pentecost’s self-deceptions are bared for the reader in a horrific climax.” —Guardian (London)
“Masterly thriller…an intensely suspenseful tale memorable for what it says about unshakable traditions that are bred in the bone.” —Publishers Weekly (starred review)
“This beautifully told gothic story of love, obligation, and legacy blends genres superbly. Hurley is considered one of the leading figures in what is called the British folk-horror revival.” —Booklist (starred review)
“Hurley explores the mysteries of human behavior and how they might explain strange events—not to mention the evil that men do—better than demonic influence. He delivers all this with consistently strong scenes, a few fine surprises, and good writing that often sparkles…A complex and highly satisfying work.” —Kirkus Reviews (starred review)
“This atmospheric, eerie novel is perfect for a rainy night in.” —BookPage
“The work’s dark tone and slow build-up of suspense will…interest readers of gothic fiction.” —Library Journal

Andrew Michael Hurley lives in Lancashire, where he teaches English literature and creative writing. He has published two short-story collections. His first novel, The Loney, won the Costa First Book Award, was short-listed for the James Herbert Award, and was published in twenty territories.