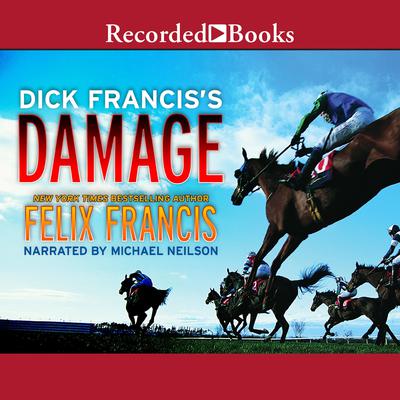 Felix Francis is back with another edge-of-your-seat thriller, in the classic Dick Francis tradition. Undercover investigator Jeff Hinkley is assigned by the British Horseracing Authority to look into the activities of a suspicious racehorse trainer, but as he's tailing his quarry through the Cheltenham Racing Festival, the last thing he expects to witness is a gruesome murder. Could it have something to do with the reason the trainer was banned in the first place-the administration of illegal drugs to his horses? Then many more horses test positive for prohibited stimulants, and someone starts making demands, threatening to completely destroy the integrity of the racing industry. In order to limit the damage to the sport, it's critical that Jeff find the perpetrator ... but he'll soon learn he's up against someone who will stop at nothing to prevail.

“Felix Francis’ latest mystery does the family tradition proud…a vivid and fascinating read.” —Washington Times
“[Felix] has the Francis formula down pat, with descriptions of the horse-racing industry real and exciting and character analysis deep and penetrating…Sharp and insightful…All the characterizations are acute, as is the plotting, and the novel is highly recommended.” —Crimespree Magazine
“This is the fourth incredible solo novel written by Felix Francis, son of the eminent mystery novelist Dick Francis, and in this latest story, the action and suspense are right on target…An extremely good story for the mystery lover, and most especially the horseracing fan. With a fascinating plot, Felix Francis continues to prove that he owns the wonderful writing style of his famous dad; yet he still has the fresh voice that allows him to carve a niche in the literary world that is all his own. Readers can keep looking forward to the next mystery that will open up the gates and unveil the underbelly of the racetracks of England.” —Suspense Magazine
“Felix Francis wields all of his father’s tools of the trade here, telling a satisfying story of murder and intrigue that barrels along without losing sight of the details…This satisfying novel is worthy of the Francis name.” —Shelf Awarenes
“Francis’s fourth solo outing ranks with the best of his late father’s thrillers set in the British horse racing world. The compelling main story line deserves high marks for originality.” —Publishers Weekly (starred review)
“Francis expertly choreographs Jeff’s extended cat-and-mouse duel…Fans of both thrillers and horse racing will be on tenterhooks.” —Kirkus Reviews
“Felix is a master plotter and suspense builder. A wonderful feature of this book is the wealth of detail Francis provides about racing…Another Francis thriller in which danger and suspense build with each scene.” —Booklist
“Michael Neilson is a newcomer to the Felix-Dick Francis world, but he narrates with perfect aplomb…Neilson appropriately speeds up his pacing as the action intensifies. His understated performance matches Jeff’s temperament: innately mild mannered yet steely enough to dig in his heels when threatened. Less low-key is Neilson’s perfect over-the-top portrayal of Jeff’s co-worker Crispin, an elderly former spy who hilariously utters the phrase ‘dear boy’ while doling out information on a need-to-know basis.” —AudioFile

Felix Francis is the younger of Dick Francis’ two sons. Over the years, Felix assisted with the research of many of the Dick Francis novels, until he finally took a more significant role in the writing, first with Dead Heat and then increasingly with the bestsellers Silks, Even Money, and Crossfire, all father-son collaborations.