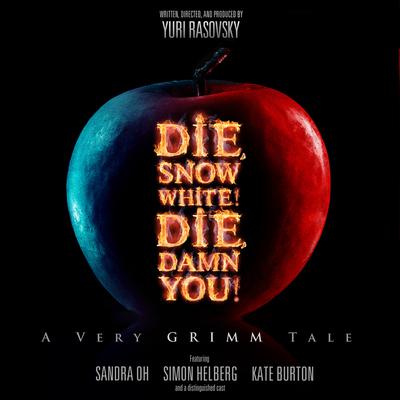 A Hollywood Theater of the Ear production
Written, produced, and directed by Yuri Rasovsky
Performed by Sandra Oh , Simon Helberg , Kate Burton , and a full cast

With the premiere of two new film versions of the Snow White tale, Blackstone enters the fray with its own adult, edgy, and not altogether serious full-cast exposé of fairy-taledom. At last it can be told! Was Snow White really as pure as the driven snow? Did her allegedly wicked stepmother get a bum rap from the Grimm brothers? What went on behind the closed Dutch doors of the dwarves’ cottage? How many handsome princes does it take to screw in a light bulb? These and other burning questions may or may not be answered in this new pseudogothic audio play that Blackstone commissioned from award-winning author and audio dramatist Yuri Rasovsky.

“Rarely is their so much fun packed into just two CDs of an audiobook! Written, produced and directed by the late Yuri Rasovsky (1944–2012), Die, Snow White! Die, Damn You!: A Very Grimm Tale is an original and hilarious reworking of the Snow White story with bits of other fairytales embedded here and there. Featuring an outstanding cast of performers…[it] is a rollicking great satire that is unrelentingly funny from beginning to end. You’ll never think of Snow White the same way again! Enhanced with superb production values, Die, Snow White! Die, Damn You! is a highly recommended ‘theatre of the mind’ experience and will prove to be an enduringly popular addition to personal and community library audiobook collections!” —Midwest Book Review
“An amusing, sometimes hilarious, retelling of the old story. As odd as it sounds, much of it is very close to the German original. The cast is amazing...The production is punctuated by perky music and sound effects. Rasovsky adds characters from a dozen other well-known Grimm fairy tales to make a mega-fairy tale.” —Audiofile

Yuri Rasovsky (1944–2012) won wide critical acclaim during his forty-year career as an audio dramatist, writer, producer, and director. His numerous honors included two Peabody Awards, nine Audie Awards, and a Grammy. In 2011, his production for Blackstone, The Mark of Zorro, was nominated for a Grammy. His final production for Blackstone before his death was Die, Snow White! Die, Damn You! He has left behind an incredible legacy.