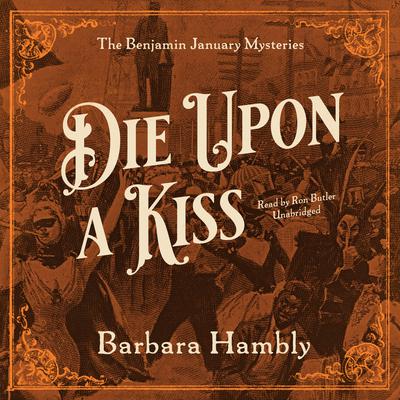 Die upon a Kiss

In February 1835, the cold New Orleans streets are alight with masked Mardi Gras revelers as the American Theater’s impresario, Lorenzo Belaggio, brings a magnificent yet controversial operatic version of Othello to town. But it’s pitch-black in the alley where free man of color Benjamin January hears a slurred whisper, spies the flash of a knife, and is himself wounded as he rescues Belaggio from a vicious attack. Could competition for audiences—or for Belagio’s affections—provoke such violent skulduggery? Or is Shakespeare’s tragic tale, with its spectacle of a black man’s passion for a white beauty, one that some Creole citizen—or American parvenu—would do anything to keep off the stage? The soaring music will lead January into a tangle of love, hate, and greed more treacherous than any onstage drama, as he must discover who is responsible … and who will Die Upon a Kiss.

“Intelligent, thought provoking, and—let’s not forget what genre we’re in here—thoroughly mysterious.” —Booklist
“The Benjamin January series is well worth reading for the depth and richness of the author’s historical research and her exquisite evocation of the Byzantine class structure, exotic culture, and menacing politics of antebellum New Orleans.” —Publishers Weekly