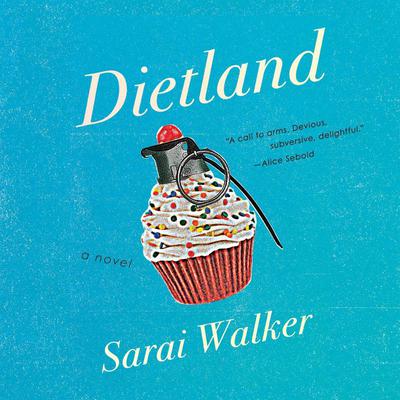 An Entertainment Weekly Best Book of 2015

One of O Magazine’s Ten Titles to Pick Up Now

One of Kirkus Reviews’ Best Books of 2015 in Popular Fiction

Plum Kettle does her best not to be noticed, because when you're fat, to be noticed is to be judged. She is biding her time at a job answering fan mail for a popular teen girls' magazine until she can afford weight-loss surgery. But lately she is being followed by a girl in outlandish clothes and combat boots. When Plum finally confronts her, she finds herself falling into the mysterious world of Callie House, where an odd collection of women orbit around Verena Baptist, daughter of a famous diet guru. Verena offers to give Plum the money for the surgery, will force her to confront her past, doubts, and the real cost of becoming "beautiful."

Dietland is a scathing and revolutionary debut that takes on the beauty industry, gender inequality, and out obsession with weight loss—from the inside out, and with fists flying.

“Witty and wise.” —People
“Finally, the feminist murder mystery/makeover story we’ve been waiting for.” —O, The Oprah Magazine
“A thrilling, incendiary manifesto disguised as a beach read…It’s a giddy revenge fantasy that will shake up your thinking and burrow under your skin, no matter its size. Grade: A.” —Entertainment Weekly
“It will guarantee that you never look at a lipstick or a pair of stilettos or a bathroom scale the same way again.” —Amazon.com, editorial review
“Sarai Walker deftly marries body insecurities and humor in her satirical debut.” —Us Weekly (A Hot Summer Novel Pick)
“A tale teeming with both sarcasm and honesty…Dietland transports readers to the front lines of the diet wars—a place where body positivity and a gratifying read are guaranteed.” —Bust
“An edgy and exciting mix of mystery, crime, and social critique of gender and beauty standards at breakneck speed. Vivid characters and sometimes surprising acts of violence make the story pop.” —Library Journal (starred review)
“Hilarious, surreal, and bracingly original, Walker’s ambitious debut avoids moralistic traps to achieve something rarer: a genuinely subversive novel that’s also serious fun.” —Kirkus Reviews (starred review)
“Tara Sands’ versatile performance captures the powerful message and feminist themes of this compelling story…Sands’ range and command of voices dramatically capture the diverse characters…Sands’ deft control of pacing and volume conveys an air of ironic nonchalance that accentuates the story’s shocking actions against women as well as the satire of this entertaining story. Winner of the AudioFile Earphones Award.” —AudioFile

Sarai Walker received her MFA in creative writing from Bennington College. Her work has appeared in Seventeen, Glamour, and Mademoiselle, among others. She was an editor and writer for Our Bodies, Ourselves and has taught creative writing and literature at several universities.