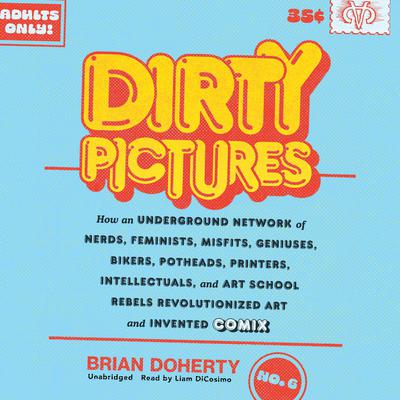 In the 1950s, comics meant POW! BAM! superheroes, family-friendly gags, and Sunday funnies, but in the 1960s, inspired by these strips and the satire of MAD magazine, a new generation of creators set out to subvert the medium, and with it, American culture.

Author Brian Doherty weaves together the stories of R. Crumb, Art Spiegelman, Trina Robbins, Spain Rodriguez, Harvey Pekar, and Howard Cruse among many others, detailing the complete narrative history of this movement that came to define “cool.” Via dozens of new interviews and archival research, Doherty chronicles the scenes that sprang up around the country in the 1960s and ’70s and the rivalries, ideological battles, and conflicts that flourished. Dirty Pictures is the essential exploration of a truly American art form that re-contextualized the way people thought about war, race, sex, gender, and expression.

“Tune in, read on, and know all. Brian Doherty’s heroic and hilarious Dirty Pictures is a detail-rich history with insight from the giants—R. Crumb through Art Spiegelman. The story of underground comix is not just important, it’s as American as an apple pie laced with LSD.” —Kliph Nesteroff, author of We Had a Little Real Estate Problem
“Brian Doherty’s Dirty Pictures is coming out right when it’s needed…It’s impeccably researched, sharply written, and opens a portal back to that old, weird America that found its mind by losing it a little.” —Reid Mitenbuler, author of Wild Minds
“In order to develop the vast field of indie comics available today, where every style and subject under the sun is available to a reader, you need the foundation laid by the underground comix scene of the 60s and 70s. In Dirty Pictures, author Brian Doherty expertly details the players and events that led to an artistic renaissance.” —Ho Che Anderson, creator of Sand & Fury

Brian Doherty is a senior editor at Reason magazine and is the author of This Is Burning Man: The Rise of a New American Underground. His reporting, essays, and reviews have appeared in the New York Times, the Wall Street Journal, the Washington Post, Mother Jones, and Fantagraphics’s The Best American Comics Criticism, among others. He has also served as a judge for the comics industry’s Eisner Awards.