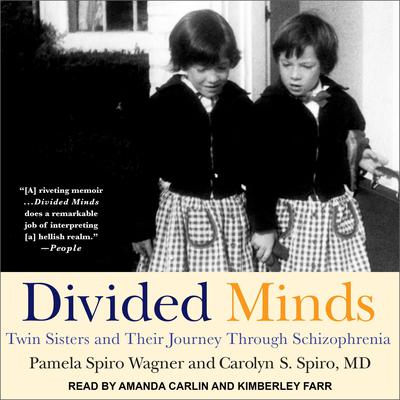 Divided Minds: Twin Sisters and Their Journey Through Schizophrenia

Growing up in the fifties, Carolyn Spiro was always in the shadow of her more intellectually dominant and social outgoing twin, Pamela. But as the twins approached adolescence, Pamela began to succumb to schizophrenia, hearing disembodied voices and eventually suffering many breakdowns and hospitalizations.

Divided Minds is a dual memoir of identical twins, one of whom faces a life sentence of schizophrenia, and the other who becomes a psychiatrist, after entering the spotlight that had for so long been focused on her sister. Told in the alternating voices of the sisters, Divided Minds is a heartbreaking account of the far reaches of madness, as well as the depths of ambivalence and love between twins. It is a true and unusually frank story of identical twins with very different identities and wildly different experiences of the world around them.

“This harrowing but arresting memoir—written in alternating voices by identical twins…reveals how devastating schizophrenia is to both the victim and those who love her.” —Publishers Weekly (starred review)

Pamela Spiro Wagner wrote Divided Minds with her identical twin sister, Carolyn S. Spiro MD, a psychiatrist. She also illustrates her experiences with her schizophrenia diagnosis and Lyme disease through poetry and art.

Carolyn Spiro graduated from Harvard Medical School and completed a year of medical residency before going into psychiatry at Harvard’s Mass. Mental Health Center. After ten years in Boston she moved to CT where she has a private psychiatric practice.