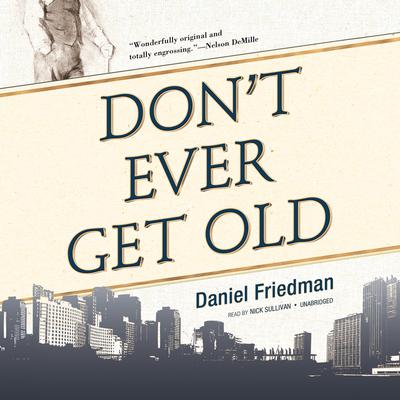 Don’t Ever Get Old

Winner of the 2013 Macavity Award for Best First Mystery Novel

A Kirkus Reviews “New and Notable Title”, May 2012

This is the first in a one-of-a-kind, spectacularly well-written mystery series featuring Buck Schatz, an eighty-seven-year-old retired Memphis cop with a know-it-all, plugged-in grandson as his sidekick.

When Buck learns that an old adversary may have escaped Germany with a fortune in stolen gold, he decides to hunt down the fugitive and claim the loot. But lots of people want a piece of the stolen treasure, and Buck's investigation quickly attracts unfriendly attention from a Mississippi loan shark, a seven-foot-tall Hasidic Jew, and a bloodthirsty maniac hell-bent on rubbing out everybody who knows anything about the stolen gold.

Readers who love Elmore Leonard, Walter Mosley, early Jonathan Lethem, and superlative detective fiction in general will not want to miss Don't Ever Get Old.

“Wonderfully original and totally engrossing...When I’m eighty-seven, I want to be Buck Schatz.” —Nelson DeMille, #1 New York Times bestselling author
“Excellent…Friedman makes his limited lead plausible and bolsters the story line with wickedly funny dialogue.” —Publishers Weekly (starred review)
“Crackling dialog and memorable characters make this a standout debut. With his curmudgeonly lead, Friedman ensures his intergenerational detective story maintains a pitch-perfect tone. The underlying theme of revenge balances a wacky plot that evokes Elmore Leonard. This has a direct topical connection with P. J. Tracy’s Live Bait, too.” —Library Journal (starred review)
“[A] knockout of a book...Ninetyish, retired Memphis homicide cop Buck Schatz makes coot-dom look like a riot.” —Booklist (starred review)
“The real prize here, however, isn’t Nazi treasure but Buck’s what-the-hell attitude toward observing social pieties, smoking in forbidden venues, and making life easier for other folks.As he battles memory loss and a host of physical maladies, it’s great to see that he can still make whippersnapper readers laugh out loud. A sardonically appealing debut for a detective who assures his long-suffering grandson, ‘I care about people. I just don’t like them.’” —Kirkus Reviews (starred review)
“If you read one book this year about the adventures of an eighty-eight-year-old Jewish retired cop and his frat-boy grandson, it had better be Daniel Friedman’s Don’t Ever Get Old…A twisty, funny, fast-paced treat.” —Harry Dolan, bestselling author of Very Bad Men
“In this crackling debut, Dan Friedman paints a pitch-perfect portrait of crusty, gun-toting, octogenarian Jewish ex-cop Baruch “Buck” Schatz as he searches for Nazi gold. Funny, suspenseful, and poignant, Don't Ever Get Old will stick with you long after you’ve turned the last page. If you love a great story well-told, put Friedman high on your list of ‘must reads.’” —Alan Orloff, Agatha Award–nominated author of Killer Routine
“Laugh-out-loud funny as well as surprisingly poignant. Kudos to Daniel Friedman for giving us a nearly ninety-year-old hero who’s not going gently into that good night—he’s going out with guns blazing, F-bombs flying, and a pack of Lucky Strikes.” —Lisa Brackmann, author of Rock Paper Tiger
“We have nothing to fear from aging, if Don’t Ever Get Old is any measure. By turns gritty and snappy, Friedman’s clever debut novel is like an epilogue to Inglorious Basterds, sixty-six years later.” —Alma Katsu, author of The Taker
“Friedman’s debut novel is one of the most original and entertaining tales I have read in many a moon…Schatz is an anachronism: a chain-smoking Lucky Strike addict; a Luddite to a fault; cranky and crotchety at every juncture. He is also wickedly funny and full of pithy homilies. Don’t Ever Get Old is just about as good as debut mysteries get. It may, in fact, mark the beginning of a new suspense subgenre: Geezer Noir. Long may it live!” —Bruce Tierney, BookPage

Daniel Friedman is a graduate of the University of Maryland and the NYU School of Law. His debut novel, Don’t Ever Get Old, was nominated for an Edgar Award for Best First Novel. He lives in New York City.