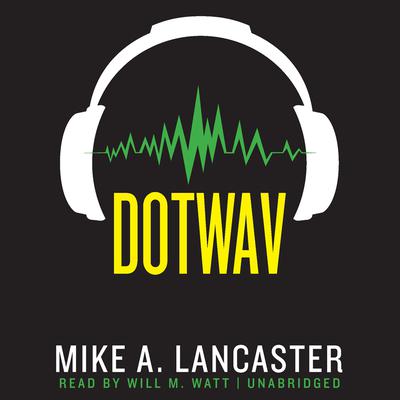 By Mike Lancaster
Read by Will M. Watt

Fifteen-year-old Ani Lee is a skilled hacker researching a strange .wav file that she’s downloaded that behaves as no file ever should.

Joe Dyson is a seventeen-year-old American transplant recruited into a secret teen division of the British intelligence service who’s looking into the disappearance of a friend caught up in an underground music scene that might be more than it appears.

When Ani and Joe’s investigations intertwine, they discover that the .wav file and the music are linked—someone’s embedding the file into tracks to create a mind-controlled teen army.

But who’s behind it? And why? And how do you stop a sound?

“This tale of ingenuity in the face of insatiable evil is a deeply infectious one.” —Booklist
“Believably written characters and a quick-moving plot distinguish this compelling thriller with an SF twist.” —Publishers Weekly
“A fast-paced sci-fi thriller for the geek set.” —School Library Journal

Mike A. Lancaster’s love of science fiction was first forged at an early age by reading Gulliver’s Travels, The War of the Worlds, and Journey to the Center of the Earth and watching Gerry Anderson shows, Doctor Who, Quatermass movies, and Star Trek. His previous novels, 0.4 and The Future We Left Behind, introduced a chilling techno-world where we only think we’re in control. He lives with his wife, children, and a menagerie of pets in Peterborough, England.