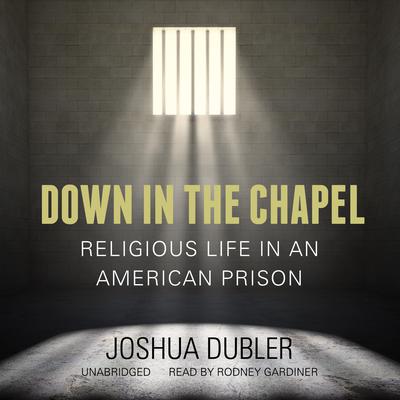 Down in the Chapel: Religious Life in an American Prison

Baraka, Al, Teddy, and Sayyid—four black men from South Philadelphia, two Christian and two Muslim—are serving life at Pennsylvania's maximum-security Graterford Prison. All of them work in Graterford's chapel, a place that is at once a sanctuary for religious contemplation and an arena for disputing the works of God and man. Day in, day out, everything is, in its twisted way, rather ordinary. And then one of them disappears.

Down in the Chapel tells the story of one week at Graterford Prison. We learn how the men at Graterford pass their time, care for themselves, and commune with their makers. We observe a variety of Muslims, Protestants, Catholics, and others at prayer and study and song. And we listen in as an interloping scholar of religion tries to make sense of it all.

When prisoners turn to God, they are often scorned as con artists who fake their piety, or pitied as wretches who cling to faith because faith is all they have left. Joshua Dubler goes beyond these stereotypes to show the religious life of a prison in all its complexity. One part prison procedural, one part philosophical investigation, Down in the Chapel explores the many uses prisoners make of their religions and weighs the circumstances that make these uses possible. Gritty and visceral, meditative and searching, it is an essential study of American religion in the age of mass incarceration.

“Brilliantly written with insight, wit, and empathy, Joshua Dubler’s firsthand account explodes stereotypes about religious life in prison.” —Elaine Pagels, New York Times bestselling author
“University of Rochester religion professor Dubler takes readers where every American should go at least once—to prison…In this important book, Dubler reveals an essential American conversation that is complex, nuanced, highly intellectual, woefully uninformed, often humorous, and deeply theological among men held in violent, repressive circumstances. This book aptly proves Dostoevsky’s claim that one can judge a society’s civilization ‘by entering its prisons.’” —Publishers Weekly (starred review)
“Scholars will appreciate Dubler’s intellectual sophistication, evident in his insightful references to the theology of ­Kierkegaard and Tillich, and to the philosophy of Hegel and Nietzsche. But a broader circle of readers will respond to the compelling immediacy of Dubler’s narrative, rich with humanizing detail. An eye-opening inquiry into a surprising religious world.” —Booklist
“A week in the life of a maximum-security prison chapel…The prison chapel presented a mix of religious beliefs all but impossible to find elsewhere under one roof: Muslims, Protestant Christians, Catholics, Jews, and variations of each of these groups…Intriguing and diverse.” —Kirkus Reviews

Joshua Dubler is an assistant professor of religion at the University of Rochester and the coauthor of Bang! Thud: World Spirit from a Texas School Book Depository. He has spent more than six years working with prisoners at the Graterford Prison.