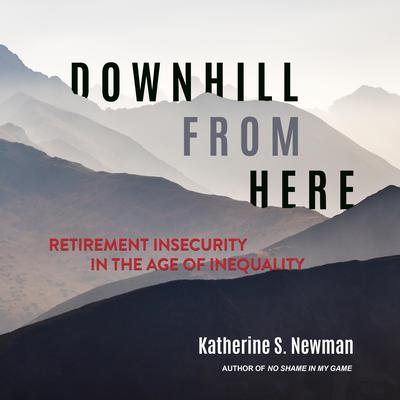 Downhill from Here: Retirement Insecurity in the Age of Inequality

Retirement insecurity is an increasingly serious manifestation of the vast inequality that risks destroying the social fabric in America. The nearly inevitable consequence of lifetime wage discrepancies, security in retirement is linked to the kinds of jobs we hold during our work lives. That, in turn, is a product of all the forces leading to historic levels of inequality, forces that have protected the very wealthy, destroyed any hold on stability for the poor, and gradually eroded the security of the vast middle class. The problem of inequality has moved from an academic preoccupation to a growing theme in national and local politics. The election of Bill Di Blasio in New York was the first real political victory that owes itself to citizens demanding a reversal of inequality. It has been an underlying them in the Democratic presidential debates, a motif for the Hillary Clinton campaign and a pronounced feature of Bernie Sanders' bid. This attention is not an accident. When members of Congress returned to their districts to test out messages for upcoming elections, the one issue that resonated among their publics was “Do something about retirement.”

Katherine S. Newman is the author of a dozen books on topics ranging from urban poverty to middle class economic insecurity to school violence. No Shame in My Game: the Working Poor in the Inner City received the Robert F. Kennedy Memorial Book Prize and the Sidney Hillman Foundation Book Award. Newman, who has held positions at Johns Hopkins, Harvard, and Princeton, is currently provost and professor of sociology at the University of Massachusetts, Amherst.