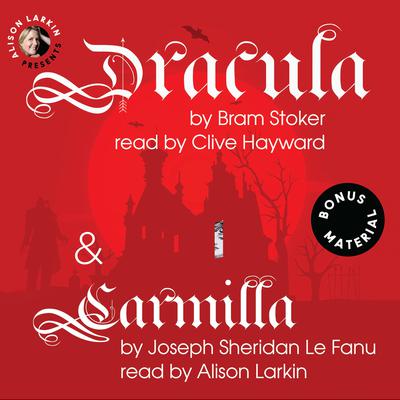 Le Fanu’s book about the tortured, powerful female vampire Carmilla has been terrifying generations with its themes of lesbian attraction and forbidden, dangerous desires. Carmilla inspired Bram Stoker to create his own vampire classic twenty-six years later. Now, these two blood-chilling tales are brought together in this brilliant recording followed by a fascinating interview in which Hayward and Larkin talk about their process and reactions to the stories, straight from the London recording studio.

Joseph Thomas Sheridan Le Fanu (1814–1873) was an Irish writer of Gothic tales and mystery novels. He was the leading ghost-story writer of the nineteenth century and was central to the development of the genre in the Victorian era.