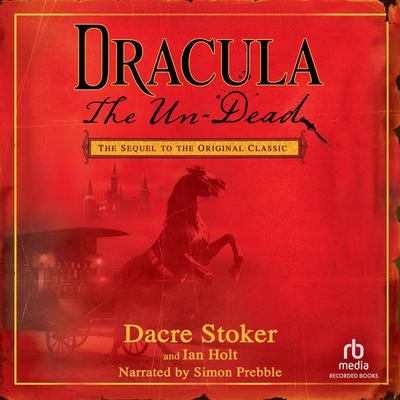 Dracula the Un-Dead: The Un-Dead

By Dacre Stoker and Ian Holt
Read by Simon Prebble

The great-grandnephew of Bram Stoker, Dacre Stoker collaborates with Dracula historian Ian Holt to pen the first Stoker-family-supported sequel to the 1897 horror classic. Based on Bram Stoker's notes, the legendary story continues 25 years after the events of the original. An evil has once again crept onto the land, this time to hunt down those responsible for Dracula's demise.A quarter of a century after Count Dracula "crumbled into dust," Quincey Harker-the son of Jonathan and Mina Harker-leaves law school to pursue a career on stage, only to stumble upon the troubled production of Dracula, directed and produced by Bram Stoker himself. As the play plunges Quincey into the world of his parents' terrible secrets, death begins to stalk the original band of heroes that defeated Dracula a quarter-century ago. Could it be that the count survived and is now seeking revenge? Or is there another, far more sinister force at work whose relentless purpose is to destroy anything and anyone associated with Dracula, the most notorious vampire of all time?

“And a good story it is. The action is swift and thrilling; the villian not whom you’d expect but is evil and powerful nonetheless…A fine book in its one right, one that pushes the story in expected directions while remaining true to the dark heart of the Transylvanian vampire-king.” —Los Angeles Times
“A frighteningly good novel…Wonderfully scary…this daring sequel captures the essence and gothic glory of the original.” —USA Today
“Un-Dead is cinematically fast paced, flying from London to Paris to Transylvania, and the historical texture is…convincing.” —Washington Post
“One of the rowdiest revisionist treatments…Energetically paced and packed outrageously entertaining action, this supernatural thriller is a well-needed shot of fresh blood for the Dracula mythos.” —Publishers Weekly
“The ambitious story, which claims to be the true story of Dracula and even reveals the real murderer behind Jack the Ripper, will appeal to literary-thriller readers as much as to mainstream horror fans.” —Booklist
“The authors…skillfully explore the nature of evil while weaving together several complex plotlines throughout this mesmerizing story. Readers who enjoy dark fantasy with fast-paced action will plow through this book, not wanting to stop.” —Library Journal

Dacre Stoker is the great-grandnephew of Bram Stoker. He lives in South Carolina with his family.

Ian Holt is a Dracula documentarian, historian, and screenwriter. He lives on Long Island.