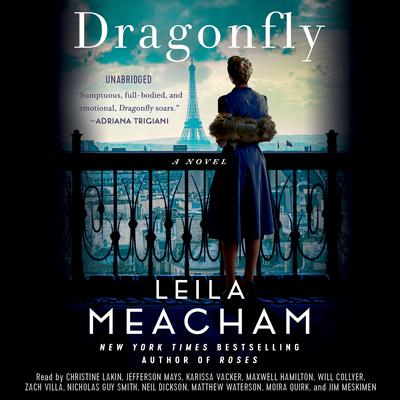 A Barnes & Noble Pick of the Month

At the height of WWII, five idealistic young Americans receive a mysterious letter from the OSS, asking them if they are willing to fight for their country. The men and women from very different backgrounds--a Texan athlete with German roots, an upper-crust son of a French mother and a wealthy businessman, a dirt-poor Midwestern fly fisherman, an orphaned fashion designer, and a ravishingly beautiful female fencer -- all answer the call of duty, but each for a secret reason of his or her own. They bond immediately, in a group code-named Dragonfly.

Soon after their training, they are dropped behind enemy lines and take up their false identities, isolated from one another except for a secret drop-box, but in close contact with the powerful Nazi elite who have Paris under siege.

Thus begins a dramatic and riveting cat-and-mouse game, as the young Americans seek to stay under the radar until a fatal misstep leads to the capture and the firing-squad execution of one of their team. But...is everything as it seems, or is this one more elaborate act of spycraft?

“This fictional account shows how people from disparate backgrounds can achieve revolutionary wins.” —Forbes
“Set in German-occupied Paris during World War II, this captivating novel stars five young Americans who received mysterious letter asking them to ‘serve their country.’ They agree, creating a secret group—-code-named Dragonfly—-that goes undercover to infiltrate Nazi ranks. But when one of them is captured, they begin to question if things are what they seem. With drama and danger, it’s impossible to put down.” —Woman’s World

Leila Meacham is a former teacher and the author of the New York Times bestseller Roses. She graduated from the University of North Texas and lives with her husband in San Antonio.